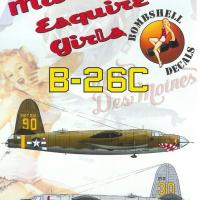 Bombshell Decals continue rolling out extremely nice decals! This release of the B-26C Marauders contains decals to build two aircraft except for one set of the National Stars, and one set of standard Curtis prop blade markings. A note explains that two of the Curtis markings would often wear off; therefore enough decals are provided for two aircraft. If you used Bombshell decals already, you will find the same quality in this bag. All the decals have a sheen and easily seen against the flat paper surface. The clear flash around each decal is minimal if you elect to trim them. Veterans of decal applications using gloss surfaces and solvents will probably not trim them. All the numbers and letters have clear film for proper spacing and decrease distortion when applied. There are no signs of color overlap which makes the decals crisp and clear. This is very obvious just looking at the nose art ladies. You can actually see blush on their faces and highlights in their hair. 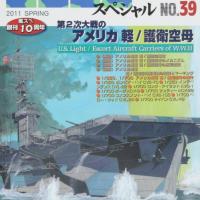 ModelArt Spring 2011 No. 39 is entirely devoted to US Light and Escort Carriers in WW2. Armor, aircraft and car buffs will only have a few small ads to peruse, with one exception. Aircraft modelers will love the section on aircraft markings for individual carriers. No. 39 turns out to be an excellent reference work on US Navy WW2 smaller carriers, but as usual the text is entirely in Japanese. However, the historical data section is still useful, and the usual scrutiny of recently available kit builds are very helpful for modelers. This format is larger than regular monthly ModelArt magazines, and the printing quality is of high standards. The book measures 210 X 296 mm (that’s 8-1/4 by 11-3/4 inches). The majority of the article photos are in color. My chief complaint with their layout is that many larger photographs of ship models cross pages, resulting in a dead zone where the spine is – it really breaks up otherwise spectacular photos. 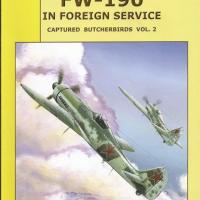 Just when you thought that everything had already been published on the subject of the Focke Wulf FW-190, along comes another book that destroys that theory. This is Volume 2 of a set of books on the FW-190’s that were captured by various Allied countries during and after World War II, and concentrates on the colors and markings rather than their ultimate histories, although some individual aircraft histories are provided. Volume 1 included aircraft captured by the British and Americans, as they obtained most of the FW-190’s in the West. Volume 2 covers those FW-190’s collected and/or used by the Soviet Union, South Africa, Yugoslavia, Japan, Romania, Hungary, Spain, Turkey, France, Sweden, Poland, and Czechoslovakia. Photos illustrate the aircraft not only in their Luftwaffe markings, but often in the markings of the air forces testing or operating them. Photos are almost always accompanied by excellent color profiles, and not less than 15 aircraft are illustrated by three or four view color drawings. This book contains a wealth of information on this little known subject, making it possible to accurately portray many different versions of the FW-190 in some unique markings, Luftwaffe and foreign. 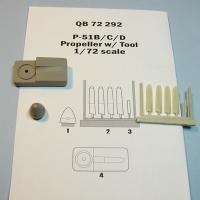 Quickboost has provided modelers with a means to attach P-51 propeller blades to the spinner for the Hasegawa kits in a repeatable manner. The resin pieces were cast in a fine grain resin without flaws and with very little clean up. What one has to do is to remove the casting gates off the bottom of the spinner and the blade setting tool. I used a disc sander for that and a snip to remove the blades and shaft from the casting block. 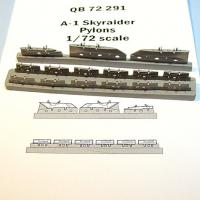 Quickboost has continued to issue sets that make building the Hasegawa A-1 Skyraider easier and with better details. This time around Quickboost presents a set with completely assembled pylons, the centerline, the fuel tanks (2) and the wing pylons (12). The parts are cast in the usual fine grain, gray resin with no defects and very little clean up.