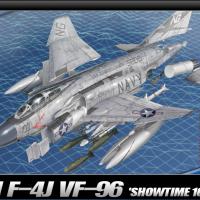 Developed as a fleet interceptor for the United States Navy in the 1950’s the F-4 Phantom became one of the most successful and prolific combat aircraft designs of the jet age, remaining in US service into the 1990’s. Tasting its first combat during the Vietnam War, Navy and Air Force Phantoms produced leading aces for both service branches.

One of the most notable of those Phantoms was the F-4J, call-sign Showtime 100, flown by Lt Randy “Duke” Cunningham and Lt (jg) Willie “Irish” Driscoll on May 10th, 1972. During a raid on a North Vietnamese rail yard, the US strike package was challenged by enemy MiG-17 fighters. During the ensuing air-to-air engagement, Cunningham and Driscoll dispatched 2 of the MiG-17’s, and would then proceed to shoot down a third MiG-17 later joining the fight, making them the first American aces of the war. While returning to USS Constellation following the 3 kills, Showtime was hit by an enemy surface-to-air missile and Cunningham and Driscoll were forced to eject, and were later picked up by friendly forces and returned safely to Constellation.

Showtime 100 has proven a popular subject among scale modelers of all ages for many years, and a fitting subject for a new generation of scale aircraft kits from Academy. Touting multi-colored parts (MCP) and “Intuitive Build…Without having to glue,” Academy presents a legendary Phantom aimed at both beginners and experienced modelers, noting it as suitable for “Age 14 years and up.”

Molded in white, light gray, black and clear styrene, basic colors and demarcation areas of the aircraft are replicated with the aim of allowing the novice builder to have a finished model resembling the prototype in living color, rather than a monotone blob. Recessed detail is crisp and deep enough for priming, painting, decaling, sealing, and highlighting with washes. Cockpit detail, including side consoles and instrument panels, is sharp and reasonably accurate. Instrument panels can either be painted or decaled.

Waterslide decals and peel-and-stick stickers are included, catering to the range of skill levels targeted.

Flying front seat on this build was almost-10 year-old Camden -- a young-but-experienced modeler and review builder. From the outset, the plan was to paint and glue everything while evaluating the snap-fit features along the way.

Starting in the cockpit, assembly progressed quickly with the only notable oversights being omission of the installation of the instrument panels from the instructions in Step 1 and absence of ejection handles for the top of the seats. Cockpit detail lent itself nicely to painting and drybrushing. Snap fit of features was well engineered and suitable for young hands, with the exception of the tiny HUD glass in Step 2, where the receiving hole had to be enlarged slightly.

Once the cockpit was assembled, things progressed quickly to assembly of the fuselage and lower inboard wing sections. Having built way too many Phantoms over the years, “coach dad” was thrilled to see Academy’s innovative inclusion of a separate exhaust blast panel section (Part I1) and inclusion of open auxiliary air (aux air) doors inboard of the main wheel wells. While the upper and lower fuselage parts fit snugly with minimal seam, the forward cockpit instrument panel protruded from under the coaming, and could not be readily horsed back into place without major rework. Camden let it ride. Aux air door tabs and actuator had to be trimmed to get them to seat in their receptors at the proper angle and distance from the fuselage bottom.

Another highlight of the kit for “Phantom Aficionados” is intake and splitter vane construction. Academy has cracked the proverbial code when it comes to engineering the intakes from leading edge of the splitter vane to the face of the J-79-17 engine. Parts assemble in a manner where the full intake tube is provided without visible seams, and the tube halves are molded with their mating splitter plane sections. Once assembled, they mated perfectly with the fuselage assembly. Bravo!

With the fuselage largely complete, inboard wing tops and outboard sections pressed into place with only a minor gap (easily remedied by a swipe of putty) between the wing upper and the fuselage side. Learning from foibles of F-4 models past, Academy also adroitly engineered the vertical tail as a separate piece and provided beefy attachment tabs to the not-so-horizontal stabs at the perfect downward cant. Camden opted to leave the vertical tail and stabs off until the end of the build to facilitate painting and decaling.

Landing gear and speed brake assembly ventured into the realm of small and delicate parts and required closer parental supervision. While the press-fit features worked well, they were a challenge for even experienced hands to handle and secure into place, and also compromised some accuracy of detail and proportion of some of the actuators. Despite those challenges, the mains and nose gear aligned properly on the first attempt.

External stores rounded out the build. Wing and centerline fuel tank halves aligned well, but the wing tank half locator pins were a bit stout and needed to be trimmed to ensure tight fit of the seam line. Missile pylon and rail attach points were somewhat temperamental and definitely required glue to keep the attached. The scheme for attaching the Sidewinder missiles to the rails involved “keys” on the missile bodies pressing into grooves on the rails, resulting in an inaccurate depiction of the interface between them. The Sparrow missiles, on the other hand, pressed neatly into their fittings in the belly of the jet. The gravity bombs pressed smartly to their triple ejector racks, which in turn pressed neatly onto the bottom of the inboard wing pylons. The finished inboard pylons, laden with Sidewinders and gravity bombs then press fit into holes (which needed a little enlargement with a hobby knife) in the wing bottom.

Although the plastic was pre-colored, Camden opted to paint and decal his Showtime 100. Eduard Canopy Masks CX417 were used to expedite critical canopy masking (link related review) .White surfaces were painted with Tamiya Fine White Primer straight from the rattle can. Light Gull Grey uppers were airbrushed using Testors Model Master Acryl Flat Gull Grey. Radome was shot with Alclad gloss black primer when it what in the airbrush for application to the stabs, exhaust blast panels, and afterburner nozzles. Stabs, exhaust blast panels, and afterburner nozzles then were masked and airbrushed with Alclad II Steel and Dark Aluminum. White and gray surfaces were then gloss-coated with a clear acrylic in preparation for decals.

Coming down the stretch into the “decal phase” is always exciting, since the end of the build is within sight. This time, though it proved to be an exercise in frustration. Despite all of the positive elements noted thus far, and very crisp-looking decals, the decals really took the wind out of Camden’s sails. From the outset, decal adhesion was poor, despite consistent application of the MicroScale system and a glass-smooth base. It was almost as if he was applying homemade decals using cheap decal paper. Silvering was universal among all decals applied, and the kid knows how to do decals well. Dad had to be called in to oversee recovery techniques involving scoring of the silvered areas with a fresh hobby knife and liberal application of Solvaset to bleed out the trapped air and get the decals to conform to the surfaces. Although much of the silvering was alleviated, there was still a notable amount left.

Decals were sealed with Future, then Ammo by Mig Medium and Deep Gray Panel Line Washes (MIG-1601 and 1602) were applied to add depth and definition to the finish. Finally, Testors Model Master Acryl Flat was applied to the Light Gull Gray surfaces.

The final result of the build was very pleasing to Camden and “coach dad.” Academy’s subject selection and fundamental engineering of the kit were well suited for the somewhat-experienced young modeler, and also piqued the interest of a number of experienced modelers witnessing progression of the build. Aside from the substandard decal quality, we would RECOMMEND this kit to young modelers with some experience and to experienced modelers looking for a quick, fun build of a legendary MiG-killer.

Thanks to Model Rectifier Corporation for the sample kit and to IPMS/USA for the opportunity to provide this review.