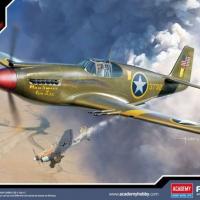 Accurate Miniatures P-51 has been released and re-boxed many times. This time Academy is re-releasing the Allison engine version of the P-51, with a nice decal set focused on the North Africa theater of operations with both RAF and USAAF service. I should point out that one of the marking options is for service over the European Theater of Operations.

The molds date back to the mid-90s. Despite the vintage of the molds, the plastic is molded perfectly, with very sharp recessed panel lines and no flash anywhere to be found.

I’ve assembled and detailed the cockpit as per instructions. Careful painting pays off, as the detail of the cockpit is among the best I’ve seen in injected plastic. A couple of things to mention are that the Instrument Panel is molded in clear. This is because the original Accurate Miniatures provided a decal for it. There is no decal for the instrument panel in this boxing. The one you see is from my spare parts. Same applies to the seatbelts, they are from my spares. The other thing to mention is that you can add the seat after the fuselage is assembled, which makes things a bit easier for handling of the model during painting and decaling.

I’ve departed from the instructions a little bit at this point. First, I glued the back and forward parts of each fuselage together. The join is along a panel line and the back fuselage has a molded in “lip” into which the front fuselage rest against while the glue sets.

After both full fuselages were assembled as a single part, I sandwiched the cockpit and all the radio racks behind the seat. Aligning all these parts takes a bit of effort. Make sure you dry fit everything before you glue them in place.

The next step was to glue the bottom wing to the fuselage assembly and then the top wings at the wing root first, assuring that there would be no gap at the wing root. After gluing the wing roots, I just gently clamped the wingtips and run liquid cement along the joins.

By doing it this way, the wings are symmetrical, but maybe not 100% straight from wing root to wingtip. I think there might be a small mold issue there. It is very hard to tell but the wings aren’t completely straight, the bend downwards roughly halfway. If you really know where to look at, you can see the very small bend. Tail planes and underbelly air scoop assembly followed, without any issue. Fit is fantastic!

The only other spot where I had a little bit of trouble was the air intake on top of the nose. Assembled out of the box looks like it “droops” down a bit. I added a shim of plastic under the air scoop and filed and sanded to shape.

Landing gear is simple to assemble and sturdy. The tires are molded independently from the hubs, making painting a breeze. The wheel well is nicely detailed and you can assemble the inner landing doors open –as per instructions- but they should be assembled in the closed position. The P-51 had the main landing gear doors closed all the time –except during retraction- as to maximize air flow into the radiator. If the P-51 was parked and the hydraulics were to lose pressure then both the flaps and the landing gear doors would drop. However, the kit is molded with the flaps up, making then only correct to assemble it with the main landing gear doors closed (as I assembled mine).

Painting was done with enamels from the True North line. I departed a bit again from the instructions. The RAF P-51 from 225 Squadron were painted in theater and there are some arguments as to what colors were actually used. I choose to paint this model in Blue Azure, Dark Earth and Middlestone. You can decide which colors to use.

I applied a coat of gloss and after 24 hrs. of curing time I’ve decaled the model. The decals are quite thin and conform to the surface detail pretty well. They also tend to stick to the first place you put them on, so have plenty of water to ‘float them’ until they are on the right location. Also, the decals tend to fold on themselves. I was able to unfold the two of them that did that. I was very careful with the handling of the rest of the decals as to prevent them to fold on themselves again. After a clear coat, weathering was applied using pastel chalks.

This kit is a lot of fun; it has great fit and it looks great out of the box. The engineering of the kit is fantastic, as several parts are molded independently (wheel hubs, engine exhaust) which makes assembly and painting much easier. The part count is relatively low, making it be a refreshing build, while the level of detail is high enough as to making it be a rewarding project.

I highly recommend this kit to modelers of any level.

I would like to thank IPMS/USA, Academy and Model Rectifier Corporation for providing the review sample.