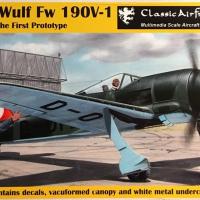 Included with the instructions is a drawing for paint and decal applications for either of two aircraft. One version was in natural metal finish and the other was in German camo markings.

Supplied was one piece of vacuum formed plastic with two canopies molded into it.

For painting the canopy I used my own masks cut from Tamiya tape.

In a separate bag included the main landing gear and the tail gear. All the parts were made from metal and had good detail to them.

First thing I did before starting the kit was to soak the parts in a combination of Windex and Denatured Alcohol (label says “Cleans Glass” instead of the one that says “Fuel” on the can). The kit resin parts came with oil residue on them.

When the two halves were put together there were little irregularities on the seam. I took both fuse halves and sanded the seam side on a piece of wet dry 800 grit sand paper and using a figure eight motion sanded the seams to even out the join halves.

The first step in the instructions was to assemble the cockpit tub and attach the deck behind the pilots’ head location. The area where the deck was to be attached to the fuse had a slight angle so rather than attach it to the tub, I decided to tape the fuselage together and fit the deck and glue it to one side of the fuselage. Sine this was a resin kit, CA was used to assemble the tub and deck would not be very flexible to try and match them to the fuse. I have highlighted the area in a following picture from the instruction sheet.

Once the deck was glued to one of the fuse halves, I glued the fuse halves together. I inserted the tub from the bottom of the fuselage and made a good fit with the deck. This area is well seen given the big canopy area and if the join between the tub, deck and fuse were not perfect, it would have stood out.

The cockpit was first primed with Mission Models Paints white primer, then gray interior color was applied and small details were highlighted with a tooth pick using Mission White, Red and Yellow paint.

I added some photo etch seatbelts from Eduard since the kit had no seatbelts.

As the fuselage came together, I had to work from the aft end to the front. I taped the whole fuse together and glued the seams. The tricky part of the assembly was getting the deck to line up with the fuselage. After I got the fuse together, I needed some C/A Talc filler on the bottom seam from the tail to where the wing meets the fuselage. Preparing the fuse by the figure eight sanding described earlier was a big help for the overall fit.

Once I cut the canopy out of the molding sheet, I sanded the cut areas to smooth off all of the frame. I masked the usual way with Tamiya tape to delineate the canopy frame and liquid mask to fill in the rest of the area.

Bondic comes in a kit with the glue dispenser in the handle and the Blue UV light attached to the opposite end.

On my models before I add any paint, I wipe the model them down with Denatured Alcohol made by Crown (the “Cleans Windows” type, not the one labeled “Fuel”) to remove dirt and grease.

I decided to prime the model with Mr. Hobby Surfacer 1500 grey thinned to a 50/50 mix with Mr. Hobby Leveling Thinner. Once I let the primer dry for 24 hours, I gently buffed the primer with a 4000-grit finishing sponge to smooth out the surface.

Once the primer had dried, I sprayed a pre-shade of Black Mission paint thinned 50/50 with MMP thinner along all panel lines.

The upper paint layer was applied with Mission Models Paint RLM 70 and 71 for the camo scheme.

Once the paint had dried for 24 hours, I sprayed the model with two coats of Mission Models Gloss Clear and let that dry for another 24 hours to give the decals a nice surface to stick to.

Tires for the aircraft were sprayed with Mission Models Paint Tire Black and weathered with gray dust pigments.

The decals were minimal for the airplane, so one small sheet was supplied. I had some difficulty applying the fuse decal letters. Number one, was the carrier for the decals was like thin tissue paper and was susceptible to tearing easily. The second thing I should have done was cut the fuse decals in half because of their length, to get the decal down on the fuse there was interference with the wing and horizontal stabilizer. I want to say there was nothing wrong with the decals I just had a bit of a fiddley time getting them in place. All the other decals went down without a problem.

After the decals were applied, I used Micro Set and Sol and the decal carrier disappeared. I then covered the decals with a coat of Mission Models Gloss Clear.

With all resin kits it is recommended that the parts be washed in order to remove residue on the surfaces left during manufacturing. When sanding the fuse halves to keep an even sanding edge, use a figure eight movement.

This is an ideal project for a unique FW-190, and/or anyone considering their first resin model. It was because of my own lack of experiences working with a resin kit that I had some issues but none that could not be overcome. This model was easy to quickly assemble. Now that I have my first resin kit out of the way I am looking into purchasing others from Classic Airframes.

The Focke-Wulf Fw 190 was a German single-seat, single-engine fighter aircraft designed by Kurt Tank in the late 1930s and widely used during World War II.

At the time, the use of radial engines in land-based fighters was relatively rare in Europe, as it was believed that their large frontal area would cause too much drag on something as small as a fighter.

Tank was not convinced of this, having witnessed the successful use of radial engines by the U.S. Navy, and felt a properly streamlined installation would eliminate this problem. The hottest points on any air-cooled engine are the cylinder heads, located around the circumference of a radial engine. In order to provide sufficient air to cool the engine, airflow had to be maximized at this outer edge. This was normally accomplished by leaving most of the front face of the engine open to the air, causing considerable drag.

During the late 1920s, NACA led development of a dramatic improvement by placing an airfoil-shaped ring around the outside of the cylinder heads (the NACA cowling). The shaping accelerated the air as it entered the front of the cowl, increasing the total airflow, and allowing the opening in front of the engine to be made smaller.

To provide enough airflow, an internal cone was placed in the center of the hole, over the propeller hub, which was intended to compress the airflow and allow a smaller opening to be used. In theory, the tight-fitting cowling also provided some thrust due to the compression and heating of air as it flowed through the cowling.

Thank you to Classic Airframes and IPMS/USA for the opportunity to review this model.