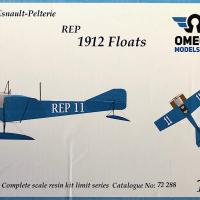 Omega’s REP 1912 Floats is a full resin kit of an aircraft designed by Robert Esnault-Pelterie. This is a difficult kit and should only be attempted by modelers experienced working with resin kits and shaping parts to get a proper fit.

Robert Albert Charles Esnault-Pelterie (R.E.P.) was a French aircraft designer and spaceflight theorist. He is referred to as one of the founders of modern rocketry and astronautics. The Vickers R.E.P. Type Monoplane was based upon his designs and marked the beginning of aircraft production at the later Vickers Limited. In 1912 Esnault-Pelterie introduced the REP Type N and in 1914 the REP Parasol monoplane. He was the inventor of the "joystick" flight control and was the first to equip his aircraft with seatbelts for pilots. The R.E.P. Type K Float Plane was constructed in 1913 of fabric-covered steel frame construction with a triangular cross-section fuselage. The two-seater float plane had an 80 hp Le Rhone engine and was tested for the first Schneider Trophy Race for seaplanes in 1913 in Monte Carlo.

The kit includes 20 resin parts, a small 7/8 in. x7/8 in. photoetch fret, length of wire, decal sheet with aircraft identifications, a small piece of clear acetate for a windscreen, and instruction sheet. The parts are molded in a yellow resin with little detail. Most of the parts are attached to casting blocks and most have flash attached. The fabric covered parts seem to have a slight texture compared to the smooth metal of the cowling. I didn’t notice any bubbles in the resin but there are some mold fill lines in the nose of the fuselage and the side of the metal cowling. The parts will need to be cleaned up at the casting block attachments and to remove the flash. Some shaping of the front nose of the fuselage was necessary due to the irregular mold fill. The kit does not use tabs or pins for locating parts, so the color profiles and online references should be used to help locate parts. The small photoetch fret includes 10 small screens which are not referenced in the instructions.

The decals provided with the kits are very thin and will break apart during placement if not handled extremely carefully. The background blue color is included around the numerals on the decal which makes it difficult to match the fuselage blue color. Also, the decal film covers the entire sheet so it must be cut as close as possible to the decal image. The details are very difficult to work with, and it might be better to substitute some individual white lettering decals.

The instructions are a single 8 x 11-1/2 sheet printed on both sides. The instructions include a brief background and dimensions of the aircraft in English and Czech languages. An illustration shows the numbers of the resin parts and assembly is shown in one exploded diagram. The instructions also include a color left side profile and an overhead view showing the colors and identification locations. The color profiles are the full size of the kit which helps to locate elements such as the wings, pontoons, and struts. There is also a small black-and-white photo of the actual aircraft. The instructions are not clear on the location or alignment of parts so referring to the profiles and photo will help. Paint colors are called out in AGAMA and Humbrol numbers, but the paint locations are not referenced on the assembly diagram or profiles. The main blue color for the aircraft body is not listed in the paint colors, so I used Tamiya X–14 Sky Blue which seemed to be a close match to the color in the profiles.

Rigging will need to be supplied separately from the kit, so I used EZ Line. The wire supplied with the kit is used for the struts. The wire is curved and very stiff, and even with annealing it is difficult to straighten the wire. Resin parts used for the strut braces are too thick, so I used some of the leftover wire instead. I initially used CA glue to fasten the wire struts, but it broke several times so soldering would be a better solution.

The wings fit the fuselage with just a butt joint so they will need to be scribed to fit, or the joint filled afterward. A jig will be necessary to get the wings aligned correctly as Omega does not provide any tabs or other alignment guides. The tail sits on top of the fuselage, but a jig will be necessary to make sure they’re in the same plane as the wings. The cowling fits the front of the fuselage with a loose joint so I used thick CA glue to fill the gap. The distance from the fuselage to the floats is not shown except by measuring the side profile.

There are two parts number 5 showing in the assembly diagram, but I think the piece that attaches to the front of the cockpit is actually part number 2. It is not clear from the instructions where this part goes. There is also a strut shown in the side profile on the bottom of the fuselage underneath the cockpit that is not numbered. I think this is part number 14.

This aircraft has historical significance as the designer was the first to use a joystick and seatbelts for the pilot. The kit is difficult however and requires careful measuring, placement, and shaping of parts to fit correctly. There is little detail on the parts and the struts are over-scaled. Only experienced modelers should attempt this kit as others will get frustrated with the fitting and difficult assembly.

Thanks to Omega for producing this unique aircraft and providing the review sample to IPMS.