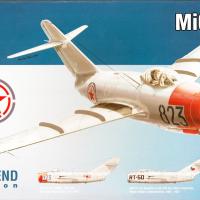 Way back when, I built the Airfix 1/72 MiG-15. I was more than happy to get Eduard’s new Weekend MiG-15, because it’s a far superior kit. So this review is going to tell you the wonderful things about this kit. But because it’s a review, there will be a couple of things that could use improvement.

Since it’s a weekend kit, there is no photo etch or additional detail parts. On the other hand, the seat, cockpit and canopy are all super examples of what can be done in a 21st Century kit. I also cheated some and painted the external parts with Testors Metalizer Aluminum. As it turned out, I could have saved the trouble, because most of it rubbed off during handling.

The cockpit consists of the seat (2 parts) a control stick, the floor, front and rear bulkheads, the instrument panel, and the side panels. While there’s no PE in the kit, the seat belts are something new; fabric belts. These are marvelous. They look good, they are far easier to work with than PE parts, and they add a lot to the seat. Using white glue for the belts means that you have some work time to get them correctly placed. There are decals for the side consoles and the instrument panel. OK, this may be a “weekend” kit, but it took me most of an evening just to assemble the seat and belts, then paint, decal and assemble the cockpit. But I’m VERY pleased with the results. The instructions also call for putting some weight in the area above the nose wheel bay, in front of the cockpit. I used white glue and some fine lead shot.

The jet pipe was next. Nicely done, everything fit cleanly and with just a little work. This kit is so closely engineered that if you leave a little nub where the sprue attached to the part, it probably will interfere with the other parts fitting correctly. A fine grit sanding stick is a necessary part of assembling this kit, to get rid of those little bumps.

The cockpit interior and the jet pipe then go inside the fuselage halves. The rudder is a separate part, trapped between the vertical stabilizer halves. I like this because it reduces the amount of filling and sanding to get the vertical stab seams looking decent. I ran into some trouble here. For some reason the cockpit parts wouldn’t allow the fuselage halves to mate cleanly. I cut down the top and bottom edges of the side consoles and the edges of the rear cockpit bulkhead until I got a better fit. I’m not sure that it wasn’t my fault, but it took the better part of 2 hours to get the fuselage halves to fit.

Next the instructions call for assembling the wings. So I did, and they fit great. The upper wing half includes the trailing edge, so all you have to worry about is getting the leading edge pretty close and doing a little clean up of that seam. Then the wings are attached to the fuselage. I had to use a little putty to get the wings to fit like I wanted to, but this really isn’t that necessary. The instructions call for fixing the horizontal stabs now, but I saved this until later.

The fuselage is finished by adding more weight to the nose area and attaching the forward lower fuselage section. Again it required a little slicing on the cockpit bottom to get this part to fit around the cockpit bottom, and some putty, but once it was in there, I was so happy with the way it fit, I took a picture of the finished seam. Getting the intake opening to fit the fuselage also took some doing, because the center splitter wasn’t mating well with those same cockpit parts I was fighting with on the fuselage and lower nose. After I finished fighting with that, I installed the horizontal stabilizers. They behaved exactly like I wanted.

I now repainted the entire aircraft silver. I had decided to do the Czech aircraft, so it was all natural metal, all over. I just had to mask the cockpit and wheel wells and paint it. I then put a coat of Future over the whole thing to protect the finish and prep for decals. Yes, I still have Future. I bought 3 bottles when they let us know they were discontinuing it, and I’m only about 2/3 of the way through the first bottle.

Once the Future was on and dried, I applied decals. They were equal or better than Cartograf’s. I have a suspicion that the better the decal is, the less time it takes to come loose from the backing paper. These decals were ready to apply about 10 seconds after dipping them in water. They slid around on the slick finish, so they were easy to get into position, and once I got them in place and wicked the excess water away, they stayed put. Even the larger decals for the aircraft number went on and stayed where I put them without folding, creasing, or breaking. As an added goody, the wing walks neatly draw attention away from the tiny seam left at the wing root. Whoever did the decals deserves an extra coffee break.

I always save the fragile stuff until last. So now it was time to install the canopy and landing gear. Fit was excellent. I put the canopy open to show off those neat seat belts. I had trouble getting the outer landing gear doors lined up, as they are small and have to fit into a tight space. But that’s my problem, not Eduard’s. At this point I was able to determine that the plane wasn’t going to sit on the nose gear without help. All that lead I put in the nose wasn’t enough. I had some small sheets of lead in my workbench, and cut a couple of slices about 3/16” (5mm) wide and 1.5 inches (35mm) long. I folded them slightly to match the interior of the intake trunk and glued them in. THAT worked.

Then there are two little T shaped parts under the wings which I would have broken many times unless I saved them until almost last. Last was the two antennas. There is a short antenna by the canopy, and a wire that runs from near the short antenna to the top of the tail. The short antenna went on pretty well, but it took me two tries to get the stretched sprue to fit between the two end points. The first try I used a candle to shrink the stretched sprue and tighten it. Held it too long and melted it in the middle. The second try was successful. That’s not the one in the photos, though, as I broke it while handling it just before I took the photos. Third time’s a charm.

Highly recommended!! This is a wonderful piece of engineering. The fit is darned good, the masks work as well as any other Eduard mask (super!!) and the decals and seat belts rate as “best seen to date”. Others may not have the fit problems I did. And that problem with the nose weight is one that you’ll have with any MiG-15. In fact when I built the Airfix MiG-15 I had to put 4 nails in the intake to hold the nose down.

Many thanks to Eduard for this great kit, and to IPMS/USA for letting me build it.