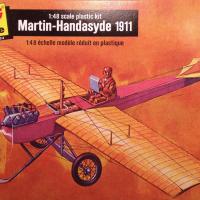 H.P. Martin and George Handasyde were an aircraft and motorcycle manufacturer from 1908 to 1922. The subject of this kit was one of their first efforts and appears to represent the third version of this aircraft. I base that on the 40hp J.A.P. engine that is fitted to this kit. This aircraft strongly resembled the French Antoinette including the odd twin wheel controls in the earlier versions. Those were abandoned after criticism from early test flights. Controls were modified to a control wheel with fore and aft motion for the elevators and wing wrapping controlled by turning the wheel. A bar controlled the rudder.

Of interest on this design is the simplified construction of the landing gear and wing warp rigging. Both shared a common post that extended above and below the fuselage. The fuselage was a multilayered wood ply triangle. The wings featured kingposts for the rigging to attach to. Of particular interest is the flat metal plate affixed to the pilots control wheel. It turns out the J.A.P. engine had a nasty habit of throwing oil into the pilots face to the point of blinding him. A deflector was devised to help with the problem. The design was not terribly successful although the company would go on to become the third largest manufacturer of aircraft during WWI. Sadly, a factory fire put the company out of business in 1922.

Once again Round2 has reissued an old Pryo kit from “Those magnificent men and their flying machines”, series and added a cool little puzzle to add as a backdrop or a base. This is the third of the series I have reviewed and the format is the same as the other two. The parts are molded in tan plastic and once again I’m impressed given the age of the kit how well it’s held up. There’s nice fabric and rib detail and the engine is a great little miniature in itself. A pilot figure is included and that really lends a sense of just how small and fragile these aircraft were. The instructions include a painting chart.

This kit came together quickly for me. The fuselage is of solid wood construction so it’s a matter of building up a nice wood tone finish on it. I elected not to do the dark ribs under the fabric color on the flying surfaces this time because there are a lot of ribs very close together. I painted the base color and then used dry brushing to highlight the high spots.. The engine was painted steel and the fuel lines in copper. I added a wash of black alcohol ink to bring out the relief on the parts. I followed the painting recommendations in the instructions for the pilot. I also gave him a dark wash for depth. The rigging is probably the simplest of the three I’ve built so far. I devised a way to use a total of six threads for the wing rigging. Like anything else, the more you practice the easier it gets. A little advanced planning helps along with some good reference drawings, Surprisingly, there are some very good period photos and line drawings of this aircraft. The only gripe is once again the wire spoke wheels are molded in solid form. I paint them in a way that will draw the least amount of attention to them.

Three down and one to go! Of the Three so far (Bleriot XI, Deperdussin being the other two) this was the easiest to build and rig. The solid fuselage and the way the wing rigging was done with the kingposts, means if you’re interested in this series this might be the kits you start with. I’m really enjoying comparing the different approaches these early designers took in constructing flying machines that had to perform on engines barely powerful enough to sustain flight. For me, the joy ride is almost over on this series. Stay tuned for the last review of the four plane series, the Avro Bi-plane. Once again thank you to Round2/Lindberg for getting these kits back out there for us older modelers to take another crack at. Also thanks to IPMS for sending me the whole series to build for you.