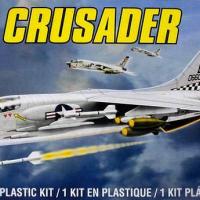 This kit is a re-release, complete with raised lettering on the underside of one stabilizer showing the 1988 date. The decals are new. It is highly recommended as the next kit for a younger modeler ready to move up from snap-together kits.

The kit shows its age in the uncomplicated engineering, raised panel lines, and very simple cockpit – but it is a true delight to build. 62 parts come in the box, and there are two options, one Navy and one Marine Corps. The instructions show the Navy version with Sidewinder missiles and the Marine version with 6 roughly 500 lb pound bombs. The in-flight refueling station can be built closed or with probe extended. The instructions are clear and easy to read – with one exception. A list of parts and color guide is included, though no call-outs for any particular brands.

The molds have held up well, although there are numerous ugly ejector pin marks and a lot of heavy seam lines. Nothing that can’t be cleaned up, but they were ugly. The fit is generally very good, and the wing tips can be built extended or folded and, surprisingly, they fit well either way. Many kits sacrifice one option to get the other right, but here either way works well. I built one of each just to test ‘em out, and have included a close-up of the fold on both the wing and the tip. The one bad seam is on the fuselage underside and there’s a picture of that for comparison as well.

I chose to build the Marine version with bombs and with the refueling probe stowed. Construction begins with the office, of course, and the four-part ejector seat presents no problem. The two-part pilot is very well done. The cockpit is basic to say the least, but looks ok when painted. I dropped it in and the fit was great, and then closed the fuselage. A shot of the office prior to installation is included.

Here a word about the only flaw in the instructions is in order. Part number 3 on the parts list, the intake duct, should go in during the middle portion of step one. It is not mentioned in the instructions and, trust me, if you don’t put it in before you close the fuselage, it won’t go in afterwards. The cannon ports come molded open, so no drilling is necessary.

Step 2 is the tail, and step 3 is the landing gear. Revell did the gear very well, as the main legs and wells all fit snugly into the fuselage and the doors are integrated – the main gear can be built in the order indicated, with very little chance of breaking anything off during subsequent construction phases. The close-up shows the level of detail is just super and I left the seam lines untreated so you can see just what you get. I didn’t do the research to see if everything is technically correct, but it looks great. The nose well drops into the fuselage, and I found that the well was a little thick. I recommend sanding it down a bit to prevent popping the fuselage seam. The doors are again an integral part of the well and prevent the whole assembly from falling inside the fuselage. I left the nose wheel strut off until last, as it is much more fragile than the main gear. It went in after decaling with no problem.

The refueling probe is next, and I recommend if you want to show it deployed, leave it off until after painting. I closed it up. The wings come after this and purists may want to trim the trailing edges a bit. The fit is superb, and as the wing notoriously raised to increase the incidence angle at take-off, you may paint the wing and fuselage separately and complete the assembly after decaling. Sadly, there is no provision to show the wing raised, but I think it would be a very simple job to fill in and support the wing in that position. The wing and fuselage join lends itself very well to such a project.

I built up the missile stations to ensure they went together with no problem, which they did, but the craft white paint I used refused to photograph as well. The missiles are single pieces, with the ugliest ejector pin marks and seams of the entire kit. It’s a pity the photos don’t show this feature. I added the bomb pylons and sway braces to the plane at this stage, but left the bombs off until after painting.

I dipped the canopy in Future prior to masking. The canopy and windscreen are simple – no Stuka-like greenhouse – but since there is no raised plastic on the outside, it was surprisingly difficult to mask for painting. As there are no tough compound curves, I managed by holding it over a strong light, but after I finished I didn’t notice that the Marine version has a black framing for the windscreen portion. I sprayed it grey with the rest of the plane and then had to touch it up by hand to meet the deadline.

I sprayed acrylics for everything, gull grey from the Model Master range for the upper services and Krylon-for-plastics rattle can for the white undersides. The Krylon is a gloss, and flows to accentuate recesses, simplifying weathering later. It is also a help with decals. The pilot got an olive drab uniform and craft acrylic white for a helmet. Future was sprayed on prior to decaling. The decals are a bit on the thick side, but they handle well and responded to MicroSet and Sol, snuggling down nicely. A very complete set of stencils is provided. The decals, particularly the stencils, were subject to silvering in a couple of areas where the Future coat was thin, so make sure that you have a very glossy coat before you use these. I took a close-up of the tail where the large decals wrap around and this shows how little trimming is needed to make them match up perfectly – little fingers will not have to mask and paint the tail to get a reasonable look.

Sticking on the bombs and the nose gear, a coat of semi-gloss to tone down the Future, and it was to the photo booth!

This kit most probably would not compete well at a contest without a lot of work – rescribing panel lines, after-market bombs, and maybe decals, dressing up the cockpit, etc. – but is quite fun to build. One of the members of my local club finished one in the Navy scheme just a week before I wrote this review (proving that all the armament provided will indeed fit on the aircraft all at the same time). I have built two, one as a teen-ager, and one about 5 years ago that I picked up at a local show. This kit is a classic and is worth revisiting in this age of over-engineered and difficult to assemble products.

In fact, it is the perfect kit for those younger modelers ready to move up from snap-together or pre-painted kits. The simple engineering and easy build, coupled with the easy price and generally great fit, make it ideal for those beginners ready for that first try with the cement. The thicker decals are easier to handle while still providing the great finish and, even more than this, the kit captures the look of this iconic fighter – the “Last of the Gunfighters.”

My thanks to Revell for the kit and a very enjoyable build and to IPMS/USA for the opportunity to review it.