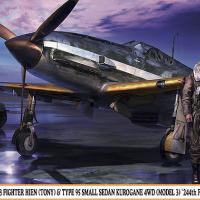 The Kawasaki Ki-61 Hien ("flying swallow") is a Japanese World War II fighter aircraft used by the Imperial Japanese Army Air Force. Built to compete with the P-40 Warhawk, the Ki-61-I was the first Japanese fighter to feature a liquid-cooled inline V engine. It was also the only mass-produced Japanese fighter of the war to use a liquid-cooled inline V engine. The first encounter reports claimed Ki-61s were Messerschmitt Bf 109s: further reports claimed that the new aircraft was an Italian design, which led to the Allied reporting name of "Tony", assigned by the United States War Department. The Japanese Army designation was "Army Type 3 Fighter”. Over 3,000 Ki-61s were produced. Initial prototypes saw action over Yokohama during the Halsey-Doolittle Raid on 18 April 1942, and continued to fly combat missions throughout the war. Most of the type was tasked with defending the home islands against bomber flights. The 244th flight regiment was exceptionally successful in this regard. The Tony was the favored fighter of the 244th flight regiment.

Type 95 Small Sedan KUROGANE was nicknamed "Daruma" it was manufacturer by Nihon Nainenki and was introduced in 1935. The small 4x4 car was sort of like the U.S. Jeep, it’s purpose was for the scouting in the field and traveling. It’s 32 HP air-cooled two-cylinder engine was converted from a motorcycle engine. It’s max speed 70 km/h and it’s weight is 1 ton with a 3 men capacity.

This limited edition kit features three marking options for 244th flight regiment pilots as well as parts for a type 95 small sedan and a pilot figure. My sample arrived in Hasegawa’s standard box. Inside were one airplane kit, one automobile kit both are typical high quality Hasegawa plastic and a very nicely cast resin pilot kit (4 parts). Other content items included the standard B&W fold-out instructions for both plastic models while the pilot only has a small painting guide included on the Tony’s instructions. The decal sheet is impressive and includes these three options:

First the Pilot; The resin parts cleaned up very nicely and fit together perfectly I encountered no issues to mention.

Second the Sedan; This thing is a real gem and I encountered no problems what-so-ever. All the pieces cleaned up neatly and fit snugly together. I really enjoyed building this one and really have nothing more to add.

Lastly the Plane, another golden oldie. This kit has been around for a while and reboxed several times. However, it has stood the test of time. First, it’s still a well-engineered kit even by today’s standards and secondly, judging by the plastic the molds apparently are still in excellent condition. All the parts and pieces fit perfectly and I only added seatbelts. I encountered no issues worth mentioning except one. The clear canopy parts had such weak framing details it was almost impossible to mask. Other than that I really enjoyed this one.

I highly recommend this one to anyone I give it a 9 outta 10 on the Greg-O-Meter. I would like to thank Hasegawa, Hobbico and IPMS USA for the opportunity to present such a fine offering.