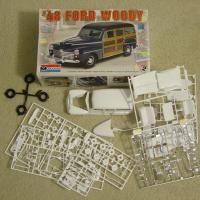 Revell has been kind to auto modelers in re-releasing past Monogram car kits that have been out of production. This time the reissue is of the ’48 Ford Woody with Monogram’s name on the box top and on the instruction sheet. With 127 parts molded in white plastic, clear plastic and a sprue of chromed parts you can only assembly a stock Woody. You’ll use all the parts with none left over, except for a few decals. 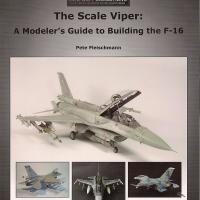 The Scale Viper: A Modeler's Guide to Building the F-16

Different modeling books tend to have a “tools round-up” in their introduction chapter. This book includes which probably is the more important tool: “The modelers’ eye”. What is meant here is that you have to study the subject, look at it several times, noticing details each time you look at the subject in order to take notes and attempt to recreate and model whatever you “see” when you are looking at pictures or the real thing you are planning to model.

The following chapter briefly covers the basic techniques of model weathering and then the book dives into very well photographed and highly detailed construction of 11 models, ranging from 1/32nd to 1/72ndscale. Markings range from USAF, to Chilenean and Israeli Air Forces. 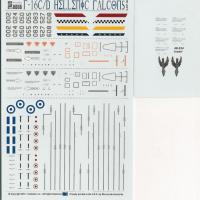 The Hellenic Air Force (HAF) is one of the major European operators of the F-16 with 157 on hand and 13 more to deliver. The HAF operates a mix of Falcons including F-16 Cs and Ds, blocks 30, 50, and 52 which means they operate both the GE and P&W engines. I have to say the HAF has one of the coolest camouflage schemes and so I was pleased to see that Two Bobs has released this sheet which covers recent block 50 and 52 F-16 Cs and Ds.

This is not an extravagant sheet since it replicates the spare tactical schemes of the HAF; which means that the flashes of color are predominantly the roundels and tail band. TwoBobs gives you the option to build two complete models of the seven aircraft schemes provided. The stencils include the newer gray markings and the older orange-yellow markings. The decals are printed by Microscale and are crisp and in register. Aircraft covered: 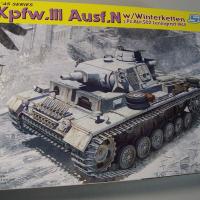 The Panzerkampfwagen III was one of the workhorses of the German army during World War II. The development order was issued in 1935 for a full-tracked vehicle in the 15 ton class. The Ausf. A model was manufactured in 1937 and was armed with a 3.7 cm main gun. Ten of these vehicles were produced but were withdrawn from service in 1940 due to insufficient armor and poor suspension. Several other variants were manufactured in subsequent years with armament increased to include 5.0 cm and ultimately 7.5 cm main guns. There was also a model equipped with a flame thrower. The Panzerkampfwagen III saw service on all fronts during the war, but the improvements in armament and armor never quite matching its opponents. 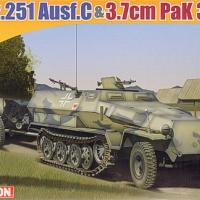 Let me begin this review as I did a previous one by stating that if you like 1/72 scale armor, you are going to love this kit, as Dragon has once again set the standard for others to follow. Included in this kit is not only a welded hull 251 Ausf.C half-track, but also a very well molded 3.7cm PaK 35/36 gun. The level of detail in the kit is right on par with their 1/35 scale kits, but will take up much less space on a shelf.

The German Sd.Kfz. 251/1 Ausf.C was a personnel carrier developed in the mid-1930’s to support the quick delivery of troops and their equipment into battle. Early vehicles sported a riveted hull, which, were later welded to ease construction, as depicted in this kit. Powered by a Maybach 4 liter, six-cylinder engine, the 17,000-pound vehicle could move at speeds of up to 32.5 mph for as far as 186 miles. This particular variant carried two MG-34 machine guns mounted forward and aft for offensive and defensive armament.