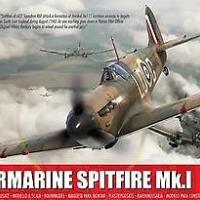 The Supermarine Spitfire Mk.I fixed its place in history during the Battle of Britain. The RAF pilots known as 'The Few' proved the Spitfire’s ability. Fighting alongside the Hurricane they overcame the struggles of the Battle of Britain over southern England and the English Channel during the summer of 1940. Powered by the Rolls-Royce Merlin V12, the Supermarine Spitfire was capable of speeds of over 360mph. Noted for remarkable maneuverability that allowed it to turn inside an opponent, the spitfire made it an excellent dog-fighter and it was the interceptor of choice for Fighter Command. Accordingly, RJ Mitchell's design is a time-tested aviation masterpiece, famous and beautiful too, first flying in 1936 and by 1940 it had become the envy of the world's air arms.

My sample arrived in the standard red Airfix box featuring boxart of Spitfires attacking Heinkel bombers. Inside I found 133 parts in grey plastic, 17 parts in clear plastic, the instructions with markings for three aircraft and the decal sheet. Please note; this kit has no common parts with the older 2007 release Mk.I . It’s based on the newer 2014 Mk.Vb’s common parts, so therefore, is a completely new tool Mk.I . The plastic is a little soft but has very nice features with fine details. I could not detect any flaws of concern to note. The kit features several options including full gun/ammo bays, positional flight controls, positional canopy and positional landing gear. Also, some parts are unique to the decal options choice. The instruction booklet is easy to understand and clearly printed in color. The decals are printed by Cartograf and look very nice.

The marking options include:

I began with the cockpit construction, a true masterpiece. It consumes the first 17 steps in the instructions before closing up the fuselage halves. These parts fit great and look great finished in the fuselage. The wings were next. Sadly I decided not to add the gun option. It requires timely plastic surgery that couldn’t be met due to time restraints on full build reviews. However, the parts look very nice. Moving forward, I added the wing spars and landing gear trunnions then closed up the wing halves. I eagerly proceeded to mate the wing to the fuselage, then followed up with the tail section and all flight control surfaces. After that came the radiator scoop, oil cooler, lower engine cowling, and all the other smaller parts needed before paints were added. The landing gear was built up and attached next. This proved to be a bit tricky because the legs have a weak attachment to the trunnions and are not in a traditional mounting hole. The rest of the build was uneventful.

I highly recommend this kit to anyone, it’s easily a 9 out of 10 on the Greg-O-Meter. I would like to thank Airfix, Hornby and IPMS for the opportunity to present this fine model kit.