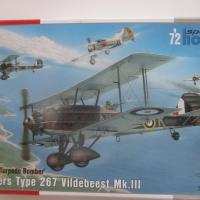 The Vickers Vildebeeste design originated as a result of Air Ministry Specification 24/25 for a land based torpedo bomber to replace the Hawker Horsley, with the first prototype flying in April, 1928. The plane was of all metal construction with mainly fabric cover. Power was provided by a Bristol Jupiter VIII radial engine. Development continued, with the first production models flying in 1932. The design was upgraded over the years, with 9 Mk. I’s (Bristol Pegasus), 30 Mk. II’s (Bristol Pegasus IIM3), 150 Mk. III’s (A Mk. II with provision for a third crew member) and 18 Mk. IV’s, (825 hp. Bristol Perseus radial enclosed in a NACA cowling). In 1931, Vickers developed a modified Vildebeeste as a general purpose type to replace the Westland Wapiti, and this aircraft, which was essentially similar to the Vildebeeste Mk. II, emerged as the Vincent, with additional fuel replacing the torpedo equipment.

Vildebeestes served the RAF effectively during the mid and late thirties, and the intention was to replace them with the Bristol Beaufort, but not enough Beauforts were available, and the Vildebeeste was still operational with RAF units in Singapore when the Japanese attacked. Although their crews fought bravely, they didn’t last long against more modern Japanese equipment, although they did inflict some losses against the Japanese. By 1942, the Vildebeestes had been replaced by more up-to-date aircraft.

The Vildebeeste was exported in small numbers to Spain and New Zealand. One ex-RNZAF Mk. III is currently being restored in New Zealand, while another is rumored to have survived in Spain.

Although there are references relating to the Vildebeeste and Vincent series in books such as Owen Thetford’s Aircraft of the Royal Air Force Since 1918, the majority of the information I obtained on the series came from on-line sources. Actually, the kit instruction sheet gave a pretty good account of the plane’s service, along with four good four-view color drawings depicting the planes covered by the excellent decal sheet. Note that the spelling of the name Vildebeeste is also given as Wildebeeste. Take your pick.

The kit comes molded in approximately 60 pieces of light grey styrene, 6 clear plastic parts, parts and about 6 resin parts, mainly consisting of the engine and its exhaust system. In addition, a small sheet of photo-etch metal parts is provided for small details. Molding is, for the most part, excellently done, although some of the struts and small parts require some pretty fancy trimming to get rid of the sprue attachment points. I don’t know why they can’t mold struts with the sprue attachment points at one end, as trimming the struts is a very tedious procedure. Areas like wing and control surface details are well done, and finely engraved panel lines provide very realistic detail. However, there is a lot of trimming of flash and sprue attachment points to be done, and this needs to be done carefully if you don’t want to damage the outer surfaces. The engine and its parts are cast in resin, and these need some fancy trimming to get rid of the flash.

There were a couple of problems with the kit, mainly minor things like the intake under the engine that shows in all the four view drawings, but isn’t included in the kit. It is easy to make one, however, so this wasn’t a serious issue. A few minor things, like attachment points for the radio antenna, have to be made up from plastic rod, but again, no problem.

The kit appears, from the assembly drawings, to go together easily, although there are no tabs and holes to line up the fuselage halves. The interior details are provided, mainly the pilot’s cockpit and the gunner’s position, partially with plastic and partially with photo etch metal. There are some VERY small parts here, and trimming with a VERY sharp Xacto knife is a must. I used superglue for a lot of the interior parts, and even then, I don’t think I got everything right, as the fuselage halves did not fit together with the precision I like. I ended up filling some of the seams with putty, and they were quite difficult to smooth out.

Once the lower wings were attached to the fuselage, and the horizontal stabilizers were installed, I masked off the interior with foam rubber, as I intended to do one of the overall silver aircraft provided for in the decal sheet. One problem here is that the wing struts and cabane struts do not have secure receptacle points, only very small indentations where the struts are supposed to go. I drilled these out a little, but even with regular MEK based solvent and a dab of super glue, the struts were not very secure, and I had the wings come apart one time, even though I was not exerting any pressure on those parts. The result is a VERY fragile model, and I had to be very careful handling it, especially after installing the rigging. The interior cabane struts don’t seem to be the right length, and this needs to be corrected.

I glued the engine parts together using superglue, and then glued the engine to the forward fuselage in its proper position. The prop, a huge affair, was glued to the front of the crankcase, and it looks OK, but it can’t be rotated once attached. . That’s not a good idea, anyway. This was the last thing I installed on the model.

The landing gear is also rather fiddly, as it is quite difficult to line up the wheel pants. (I decided against the open wheels, although they are provided).

Since I had decided to model one of the silver aircraft, I didn’t paint the model’s exterior until I had the basic components assembled. I filled the cockpits with foam rubber scrap, and airbrushed the whole thing with flat aluminum enamel.

Decals were fairly simple, as they are of very good quality, and don’t require any trimming. Some of the smaller decals, including the stenciling, tended to fold over, as these decals are very thin, but with care, they came out looking very good, A coat of clear gloss enamel spray sealed the decals in position. Now the model was ready for rigging.

A biplane model has to be rigged in order to look realistic. This one has rather basic rigging wires, and fortunately, photos don’t show parallel rigging wires such as they have on American biplanes. One wire does it all, and this makes the rigging process decidedly easier. I used my electronic wire rigging method, where I strip the insulation from the wire, roll the wire out flat using a flat roller, and then measure and cut each wire using dividers and an Xacto knife. I usually glue the wires in place using white glue, although this time, I used superglue in some places, as I wanted the rigging wires to actually strengthen the structure. I’ve done this on larger biplanes, using stiff piano wire, but this is the first small biplane I have used this method on.

The PE sheet had some rigging included, mainly control hinges and cables on the tail section. I had to be very careful when handling the model while rigging and attaching the final parts, but after the first disaster, I didn’t have any further problems.

This appears to be a very accurate model of an airplane that has been issued in 1/72 scale previously by a number of manufacturers, including Contrail, Merlin, O’Neill, Replica, and Silesian Eagle. The Vincent has been offered by Czechmasters, Merlin, O’Neill, Replica, and Sutcliff, but some of these probably use the same parts as the Wildebeeste, as they are very similar. Also, some of these are probably vacuform or resin, so this may be the first really high quality model of this aircraft using injection molding technology.

That being said, this is not a model for beginners, youngsters, or even some older enthusiasts. It takes a lot of painstaking effort, and requires absolute attention to the instructions, which are not always clear. I found it challenging, but it resulted in a model that I can be proud of. It fills in a gap in my British collection that I needed to fill, and I will probably go ahead and acquire another so I can do a Vincent.

I can recommend this model only to experienced modelers who are willing to do the research and work necessary to make this into a showpiece. It is certainly not a weekend project. I took several weeks, working on it, and the final stages took a lot of one hour sessions to add such things as details and rigging. But it was fun, and that is the idea. Try one of these if you think you’re up to it.

Thanks to Special Hobby, Phil Peterson, and John Noack for the review sample.