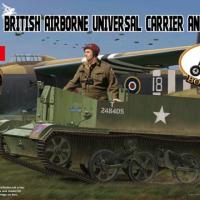 This is a new version of many Riich Universal Carrier’s and is the Airborne Version. The Universal carrier was changed to reduce its weight to enable it to be carrier in the Hamilcar Glider. This included removal and reduction of the armor plate and removal of all unnecessary equipment.

I had built the Tamiya Universal carrier many moons ago and I thought that was a great version but this excels in every area and now I must go and buy the other version of the Universal carrier released by rich.

The kit is includes a lot of unrequired parts as these are for the standard Universal carrier.

Then on to painting and decals.

Overall I found this kit enjoyable and build into an impressive representation of the Airborne Universal carrier. This is very well detailed and builds into a great model!

Thanks go to Dragon USA for providing this kit to review and IPMS USA for allowing me to review it for them.