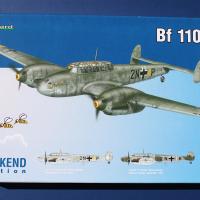 The Messerschmitt Bf 110, often (erroneously) called Me 110,[2] was a twin-engine heavy fighter (Zerstörer—German for "Destroyer") and fighter-bomber (Jagdbomber or Jabo) developed in Nazi Germany in the 1930s and used by the Luftwaffe and others during World War II. Hermann Göring was a proponent of the Bf 110. It was armed with two MG FF 20 mm cannons, four 7.92 mm (.312 in) MG 17 machine guns, and one 7.92 mm (.312 in) MG 15 machine gun or twin-barrel MG 81Z for defense. Development work on an improved type to replace the Bf 110, the Messerschmitt Me 210 began before the war started, but its teething troubles from its aerodynamics resulted in the Bf 110 soldiering on until the end of the war in various roles, alongside its replacements, the Me 210 and the significantly improved Me 410 Hornisse.

The Bf 110 served with considerable initial success in the early campaigns, the Polish, Norwegian and Battle of France. The primary weakness of the Bf 110 was its lack of agility in the air, although this could be mitigated with the correct tactics. This flaw was however exposed and mercilessly exploited when flying as close escort to German bombers during the Battle of Britain. When British bombers began targeting German territory with nightly raids, some Bf 110-equipped units were withdrawn and redeployed as night fighters, a role to which the aircraft was well suited. After the Battle of Britain the Bf 110 enjoyed a successful period as an air superiority fighter and strike aircraft in other theatres.

During the Balkans Campaign, North African Campaign and on the Eastern Front, it rendered valuable ground support to the German Army as a potent fighter-bomber. Later in the war, it was developed into a formidable night fighter, becoming the major night-fighting aircraft of the Luftwaffe. Most of the German night fighter aces flew the Bf 110 at some point during their combat careers, and the top night fighter ace of all time, Major Heinz-Wolfgang Schnaufer, flew it exclusively and claimed 121 victories in 164 combat missions.

The kit is produced by Eduard, a well-known model company who bring us high quality model kits and accessories. The box artwork shows a BF 110C flown by Obl. Urban Schlaffer in a banking turn towards you.

The kit consists of 119 parts and comes on seven gray sprues, one clear sprue, and super fabric seatbelts. The parts are nicely molded and there is no amount of flash. This is to be expected keeping in mind the quality of the eduard molds. All panel lines are recessed and all the sprues have small gates. The 12 page instruction sheet shows the suggested assembly through 13 steps starting with the cockpit / interior assembly, and progressing through the fuselage, wing, landing gear, and cowl assembly. The clear sprue parts for the canopy, side windows, and landing lights are a little thick but fit with no problems.

This kit fits together very nicely and no filler was required to fill any seams. I had no problems with gluing together any of the subassemblies. None of pieces required any cleaning up of flash. I built this model as the one flown by Theodor Weissenberger from Kirkenes Norway 1941. The German Luftwaffe used these aircraft for the entire duration of WW2 in a variety of roles. Crew figures are not included. There are also a large number of unused parts hinting that these sprues have parts for later versions. Decals are provided for all cockpit instruments and lay down with no problems. The super fabric seatbelts have to be one of the best accessories provided by Eduard to date. They are self-adhesive and look great in a cockpit compared to photo etch or tape seat belts.

There are two decal options for this Bf 110C Destroyer.

The decals are printed within register and lay down with no silvering. Again the quality we have all come to expect from Eduard.

Overall the kit is a joy to build and builds into a handsome Bf 110C Destroyer!