Lancaster B Mk.III Dambuster – Part 1 of 3 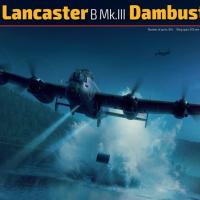 In 2012 Hong Kong models entered their first 1/32 scale model the B25J Mitchell and since that time modelers have been seeing a long line of 1/32 scale kits, multiple B25s, B17E, F and Gs, the Dornier Do 335A and B and the De Havilland Mosquito B Mk. IX/ Mk. XVI and Mk. IV Series II. Now we have the Avro Lancaster B Mk.I which has been reviewed by IPMS member Eric Christianson this year, and of course the Lancaster B Mk.III Dambuster that I am reviewing now.

The RAF during WWII needed a 4 engine bomber that was capable of delivering a large bomb load over 2000 miles. Early in the war the British only had twin engine bombers that could not fly fast enough, far enough or high enough and take damage from flak and fighters, hence the Avro Aircraft company designed the Lancaster from the twin engine Manchester which suffered from engine fires resulting from the unreliable Rolls Royce Vulture engines. So they used the basic airframe of the Manchester and increased the wingspan to accommodate four Rolls Royce Merlin engines. Initially they called it the Manchester III but then decided to change the name to Lancaster. Some Lancasters were specially modified to carry huge bomb loads, the 12,000 lb. Tallboy, the 22,000 lb. Grand slam bombs, and of course the famous spinning dambusters bomb, the raid that took out the Ruhr valley Dams.

This is the first installment (of three) that will cover the assembly and painting of the interior, of the fuselage and the turrets.

When I received the kit I knew it was going to be a big box, I have the B17G kit from HK and it looked to be the same sized box . When I opened the box it was a large stack of sprues all in individual clear packaging. I’ve heard some negative comments about HK and why they don’t put dividers in their boxes to keep the contents from banging around but I have not found any problems with the individual packages having any broken pieces yet. Even the clear parts have clear tape on the canopies and turret glass to keep them from getting scratched or chaffed.

There are 800+ parts in about 25 separate bags that will need some type of cleanup from removal off the sprues. Overall the parts are flash free and there are no defects that I have seen. The sprue attachment points are not too big and are in an area along the edge of the piece so it is not too hard to clean up after removal. There are circular ejection pin marks but are in areas where you might or might not want to clean up during assembly, or would not be seen after assembly. The fuselage and wings have a lot of rivet and panel line detail which will have to be re-done after assembly and sanding, and it’s a long fuselage. The fuselage comes in four sections, two cockpit halves and two fuselage halves. The wings are a one piece unit, I don’t know how it was molded, maybe slide molding, but they look great and no seam at the leading edge. The wing tips are separate and also one piece, they attach at a natural seam line so no worries. The wings, like in the B17 kit, are detachable so if you need to move or store the model that’s convenient.

The kit comes with two instruction manuals, one for the Mk.I assembly and one for the Mk.III Dambusters modification assembly. There is only one marking you can do for the Dambuster decals, the B Mk.III Special, ED932/AJ-G, No. 617 Sqd. RAF, Scampton, UK, May 1943. They do supply the three decal options for the B Mk.I if you choose not to do the Dambuster version.

There is a color guide on the back of the instruction sheet for AK interactives, Tamiya, and Gunze/Mr. Hobby paints.

One last thing, there is one small photo etch set that contains 10 items mostly seat belts. The seat belt for the pilot looks fine but the belts for the other stations are questionable in size and shape.

The kit comes with two instruction booklets, one for the Mk.I and one for the Mk.III Dambuster modification. The booklet is printed in black and white and is big at 10’’ X 14” even though it’s quite bigger than most it is easy to read and see the smaller parts. The booklets have a page that shows the sprues labeled A-Z so if you can’t find what you’re looking for you can scope out the booklet.

The interior has three separate sections that are joined once assembled, the cockpit area the crew quarters and the rear area that has a pair of super long ammo tracks that go back to the rear turret. Once you finish all three they get glued together and can be installed in the fuselage half.

Assembly begins with the cockpit section and the pilot’s seat, the detail is fair and builds into an ok representation of the original. The PE seat belts once painted look pretty good once installed but the PE belts for the rest of the crew seats are very rudimentary and look too wide and clunky. The instrument and auxiliary panels are a big disappointment in this kit with no real detail and there are no decals to apply for the gauges. I can’t imagine why with a kit of this size and detail they omitted having at least a decent instrument panel to install. To remedy this I have decided to get the aftermarket instrument panel from Airscale, which was quite an undertaking to get everything together. I went online and found a video of a buildup of the instrument panel, good thing I did because the instructions sheet for them is not the best, it is about twice the size of a business card and doesn’t have any pictures of the build only pictures of the real panels, but it was well worth the time and money to have some panels to compliment the aircraft kit. The cockpit, crew and rear sections all went together very easily with no fuss. I pre-painted all the areas with RAF interior green and RAF Night before assembly

The fuselage halves have a few detail pieces to apply before painting the interior with RAF interior green and RAF night in the appropriate areas then installing the myriad of windows, 26 to be exact, which are rather thick but very clear and have a nice wide glue edge. At this point is where you have to refer to the Dambusters instruction sheet. There is some differences with extra parts starting at step 9, then 13, 14, 15, 16, 17, 18, and 19.

Closing up the Fuselage

Once everything was done I began installing the cockpit and crew areas into the fuselage. Everything went together fairly well and fit fine for the first half, then I installed the other half of the fuselage, I had a hell of a time trying to get the fuselage halves to get together to glue, I had clamps, rubber bands, I was pushing and squeezing till my hands ached, but by golly I got it done. Then came the sanding and filling of the seam lines and re-applying the rivet and panel lines, lots of work, but it looks good now.

The gun turrets on this kit are fairly detailed and go together well, there are three turrets, the nose, the dorsal and the tail, and all are a little different. The instructions could have been a little bigger to see some of the smaller parts that go together but I had no problems. The one issue I had was with the rear turret, there are two clear parts that are installed and in the instructions it says to paint everything RAF Night but there are actually two windows on the clear parts that have to be masked before painting, good thing I referenced some original pictures and saw that those were windows before I painted. The canopies for the turrets are very nicely molded and detailed and the plastic is free from distortion. The kit barrels are ok but this would be a great candidate for aftermarket brass or resin barrels.

While this 1/32 Lancaster is a huge kit and might intimidate some model builders, I have done numerous 1/32 scale models and find this kit challenging but fun. This kit goes together very well, though it has 800+ pieces the old adage “how do you eat an elephant? One bite at a time”!

Thanks to HK models for the 1/32 Lancaster and thanks to IPMS for the opportunity to review this kit.

Next Part
Lancaster B Mk.III Dambusters - Part 2 of 3