Lancaster B Mk.III Dambusters - Part 2 of 3 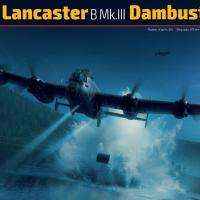 Welcome back to the second installment of the HK 1/32 Lancaster B MkIII Dambusters review.

The bomb bay area is different on the dambusters edition of the Lancaster, it eliminates the bombay doors and replaces it with a cover and the structure for the spinning bomb. You have to reference the Dambuster instructions #27 & 28 to install that section. Everything went together well and I pre-painted everything flat black except the spinning bomb which is olive drab green.

The engines are easy to assemble and comprise of about 30 pieces, once assembled they are a fair representation of the Rolls Royce Merlin engines but can use some detailing to bring them up to contest quality. I will not have my engines uncovered so I will not do any further detailing.

After engine assembly the engine mounts are next and are a fine example of them. Once the engines and mounts are together they are mounted to the firewall and the framing for the back side is attached along with the oil tank. Two of the engine assemblies have the landing gear and nacelle attached and go onto the wings as one assembly. The landing gear or alighting gear as the Brits call it, are a complex and very robust assembly. Installing the gear into the gear bay was a challenge, for some reason the gear was very hard to insert into their respective slots, I thought I was going to break the gear trying to install them but eventually got them set right. Everything goes together well and looks good once assembled. There are four assemblies you have to put together.

Next is the wing assembly. Once the engine assemblies are done you can mate them to the wings. The wings are a one piece assembly so no seams on the leading edge. They must have done a slide mold on the wings. The wings have very nice detail with fine panel lines and rivet detail. The wing tips are also slide mold one piece units. The fit of the wingtips to the wings need a little massaging to get them lined up right, but no problem. The ailerons are separate units with nice detail and are moveable. The flaps are two separate sections and can be positioned open or closed. Once all is assembled it is quite a big and impressive wing. Now for the other side.

The horizontal and vertical stabilizers are very nice moldings with some nice detail in panel lines and rivet detail along with the elevators and rudders. The Lancaster has twin vertical stabilizers. All of the components are either two or three piece units and are very thin and look scale. The elevators and rudders are separate units and can be posed in different positions. The rudders and elevators have the counterbalance details and trim tabs and linkage that look very nice and scale.

The wings attach to the fuselage with a sturdy slot and slide connection so if you want to remove the wings for packing up for a contest or show. The horizontals attach to the fuselage by way of a recessed area with two posts that fits snug. The propellers are individual and glue into the hubs with slots so they are all aligned correctly, add the spinners and they look great. The cockpit canopy is a very detailed piece and will look good once painted. There’s a few more detail parts like antennae and bits to attach to the fuselage. The turrets look good mocked up in their respective places, I am adding the Master Model #32-113 brass gun barrel set to the turrets and i will be painting all the canopies once I mask everything up with Eduards JX225 mask set. This is one big airplane and will need a lot of room to display.

The third part to this build will be masking, paint and decals and final thoughts. I will be using Tru-color paint and will be giving my review of the paint also. Till next time happy modeling.