Lancaster B Mk.III Dambuster – Part 3 of 3 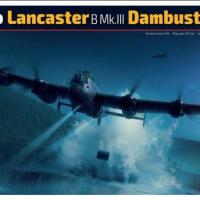 Welcome back to the final installment of the 1/32 HK models Lancaster B Mk.III Dambuster review.

Last time we finished the bomb bay area, wings, tail feathers and did some initial assembly.

This time we will be masking, painting, decals and final assembly.

First off this is a big model and requires a bit more paint than other kits. I happened to request the paint I needed from Tru-Color paint, which they gladly supplied. I received three 2oz. bottles of paint 1-2oz. bottle of thinner and 1-2oz. bottle of acetone. Matte black for the underside, matte RAF dark green and RAF dark earth for the top side. I start the paint process by masking all the canopies and windows, (there’s a lot of them), with Eduard’s mask set #JX225, I have always used Eduard’s masks when possible, they are definitely a time saver. Painting started with the bottom side of the wings, horizontals and vertical tail planes. I initially painted everything with Model Master Aluminum lacquer. I do this for two reasons, one so I can see any imperfections in the model, like sink marks, scratches or seam lines, and two so I can do some weathering and chipping which reveals the natural aluminum under the paint. I started the paint process with the matte black on the wings and boy did it take a lot of paint, those wings have a lot of square footage. I had done pre-painting of the nacelles before I installed them on the wings so I just did some touch-up while doing the wings. The vertical tail received the same matte black on both sides and the horizontals received it on the underside.

Once completed I started the process of pre-shading the top of the wings with flat black and then laying out the camouflage scheme for the topside of the wings. I take a pencil and lightly trace by eye the contour of the camo scheme, then I got my paint ready and sprayed the Dark Earth color first, I roughly follow the lines and go over a little bit. After about a half hour I load up the Dark Green and spray the rest of the camo overspraying the Dark Earth. I usually do the camo pattern on most aircraft by eye and it always seems to come out looking good. I usually go over the camo painting a few times with each color till I get the best results and clean edges. Next is the top of fuselage and horizontals. I do these the same as the wings. I mask off the demarcation line between the black sides of the fuselage and the camo top. I masked off the area around the cockpit area before I install the canopy and spray the area under the canopy behind the cockpit, then install the canopy when dry and finish the rest of the top of fuselage alternating Dark Earth and Dark Green. I then moved on to the horizontals and finished the camo pattern there. The propellers had been painted previously with the standard black with yellow tips but no decals for stenciling. Once I’m satisfied with the look of the paint job I move on to the decals.

When I was building this kit I was entertaining the idea of using a masking set to do the roundels, numbers and letters instead of decals but I could not find anyone who had a set out yet for the Dambusters Lancaster. So I decided to use most of the decals and custom make the mask for the top wing roundels and walkway stripes. Starting with the bottom wings and horizontals I laid down some future for the decals and laid the red stripes and stencils. I found the decals to be a little on the thick side but not too bad. I used plenty of blue and red micro set and the decals snuggled into the panel lines and rivets. Once done I added another coat of future over the decals. After waiting overnight I sprayed a coat of semi-gloss clear lacquer over the decals to blend the sheen to match the wing. I did the same to the bottom of the horizontals. I then moved to the sides of the fuselage and added the roundels and letters along with the various stencils doing the same technique for each. Once that was dry I proceeded to the top of the wings. To begin I measured the decal roundels and cut out the masks with a circle cutter, one for the outer circle and one for the inner. I sprayed the two colors, blue with red center, and the roundels came out looking good. I did the same with the black walkway stripes and they too looked good. Even though I use decals for certain things, I still prefer the look of the painted stars, roundels, numbers and stencils, they look more natural.

So after all the sprue snipping, part fitting, gluing, painting and decals its time to put this beast together. Really there is not much to assembling this massive model. The wings just slide onto the fuselage and fit fairly snug and the seam looks good. The horizontals slide into the fuselage with two pins per side and go into a recessed area, which is very snug, and the gap is invisible. The front and rear turrets just drop in and the propellers just push on. The front turret has a fairing that closes up the gap that was a pain trying to get it to fit right but all went well. In the end everything went together well and looks good.

All in all I am very pleased with the final product of this 1/32 Dambusters Lancaster. There was a few fitment issues but nothing to complain much about. The only beef I have with the kit is a lack of a decent instrument panel, for a kit of this size and cost I believe a decent representation should be included. I recommend this kit to more advanced modelers for the sheer size and amount of parts in the kit. I built this kit out of the box except for the aftermarket instrument panel and brass gun barrels. I am sure there will be plenty of aftermarket parts and photo-etch that will be available for this kit shortly.

Thanks to HK Models for supplying the kit and thanks to IPMS for the opportunity to review it.