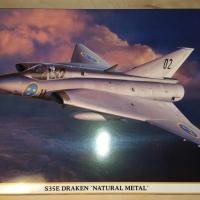 Designed by Swedish aerospace company Saab, the S35E Draken is a reconnaissance version of the original fighter Draken. The Draken was manufactured by Saab between 1955 and 1974 it was built to replace the Saab J28 Tunnan and Saab 32 Lansen. However to this date Draken’s have been retired from military service.

There are roughly 117 parts in the kit totaling 9 sprues with very few parts not being used. The decals provided allow you to make your plane either the 11-02 or 11-16 version. Most decals provided are not used (decals 17-35). There is no armament with this kit. The fuselage comes in two halves (top and bottom), they fit together really nicely. The one thing I noticed immediately was the nice panel lines that this kit has. There are only 13 steps to this kit but that’s because two steps have a large amount of pieces to glue on.

The first step is assembly of the cockpit; I opted not to put in decals on the panels as there were already details in the cockpit. Step 2 is installing the cockpit into the bottom half of the fuselage. The crucial part to this step is that you need to cut the holes for the drop tanks and the holes for the cameras. Pretty easy, I just took my X-Acto knife to cut open the holes. Step 3 is combining the fuselages, you will need 4 grams of weight to put in the nose. I would recommend a weight that you can shape because there is not a lot of room between the cockpit and the fuselage. If you put a rigid weight in you may not be able to put the two halves together nicely. I also noticed that if you don’t watch how the back end of the fuselage goes together you may end up with an overlap section which makes part of the engine fuselage difficult to put on.

Step 4 is the main wing, vertical stabilizer, nose cone, inlets, and other small pieces. This is the part you will need to notice how the two half fuselages went together. The engine fuselage portion will not fit properly if there is any overlap and you will need to cut off some material from the peg. Unfortunately that is what happened to mine. There is a little gap between the fuselage and the wings which can be simply fixed with some putty. Other than that everything else in this step went together really well. From my personal experience I would wait to install the inlets until the end.

Step 5 is the nose landing gear, nothing surprising here. I did have to sand down the peg to get it to fit flat into the well though. Step 6 is the main landing gear and these actually went together better than anything else. No issues to talk about here. Step 7 is the ram air turbine assembly. Step 8 is the tail gear and the engine/exhaust assembly. The engine doesn’t have anything exciting to it and it fits inside of the fuselage engine. Step 9 is putting all of the landing gear components on, like the doors and some camera lenses on the nose. The only non-landing gear thing is the engine. There is also a hole it instructs you to fill in when working on this step I had no issues getting everything on in this step either.

For those who struggle with taping metallic colors without stripping off the color I have good news for you. This whole plane is one color. That’s including the landing gear, the drop tanks, everything. Now because the inlet has 3 color bands I didn’t put them on so I could paint those separately. For most paints I used model master colors. Except for burnt iron and the silver. For burnt iron I took a model master steel and a rust and mixed the two together. I have found this looks better than anything else I’ve been able to find that is “burnt iron”.

From the pictures I saw this plane looked more of a dull aluminum than a silver. So instead of using silver I used Humbrol 27001 Aluminium Metalcote. This sprayed on really well and the plane looked like the dirty dull aluminum look I was going for. The last step for me was putting the inlets back in and I was done. The decals were an issue for me. I have only recently (the last year or so) learned how to properly place decals and I’ve never had any issues with decals. However this plane gave me trouble I had 2 decals fold up on me and since there are only 14-15 decals that you need to place it was disappointing when they didn’t end up placing properly. They just seemed a little more flimsy than I have noticed from previous hasegawa kits that I’ve reviewed. I also had issues with the instrumentation decal, it was too big and flimsy to fold all the way around.

Overall this was a decent kit. It was a quick kit to put together, and knowing the knowledge of the kit that I have now I know I could go back and make it a lot better than I did. I didn’t use their suggested paints because I don’t have a hobby shop that has these paints so I’m not sure how much better they would have looked. I think the paint came out fairly well for what I used though.

Thanks to Hobbico and IPMS/USA for providing this copy and the opportunity to take a look at their model of this nicely designed kit.