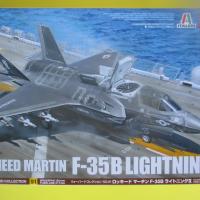 Designed to replace such aircraft as the USAF F-16, A-10, the Navy’s F/A-18, and the Marine Corps ASV-8B STOL aircraft, Lockheed Martin’s Joint Strike Fighter was accepted by the armed services and three versions have been produced so far. Those versions are the USAF F-35A, the Marine Corps F-35B VTOL aircraft, and the Navy’s F-35C carrier fighter. A number of foreign countries have ordered the type. The Marine F-35B provides vertical as well as horizontal thrust. The F-35 is capable of several missions, including air superiority, ground attack, and interception duties. The Marine Corps unit VMFA-121 Green Knights was the first unit to receive F-35’s in 2012, and they have since been issued to USAF and Navy units. Currently, F-35A’s are being used as fighter trainers at Luke AFB, Arizona, where I see them flying almost every day. They are most impressive to see and hear in the air.

There are many sources of information on the F-35 series on line, and since it has become a standard fighter for our armed forces, information should be readily available.

The kit instructions consist of 12 sheets of 12” x 6 ¾” paper. A historical background in 8 languages is on the front page, followed by the usual lawyers’ jargon in only four languages. A list of paint colors, tools required, and a painting guide is provided. A total of 27 exploded view drawings are provided, showing the modeler how the parts go together, although there is no sprue diagram provided. There is a tremendous amount of detail included in this kit, as the builder can build the model in normal operating mode or with the vertical takeoff configuration with the intake and exhaust sections of the engine visible. Drawings show the color to paint each part or feature, and in general, these are quite good, although they could have provided more information on interior colors that are visible with the gear down and doors open. It would have helped to have some of the parts named in the drawings, as the drawings don’t always show the exact shape of the parts.

The instructions are complete, and the sequence of assembly is quite different from most kits. Some information is left out, including the step in which the ordnance racks on the wing underside are attached to the underside of the wings. Holes in the wing under surfaces are required to be drilled for these, but this is not mentioned in the instructions. In addition, the doors that need to be opened for the landing gear and VTOL details are very complicated, and they are apparently intended to be installed before the upper and lower fuselage sections are supposed to be glued together. Good luck in this process, as the doors are very fragile, and improper handling will result in the doors coming loose. When you build this kit, keep track of all of these doors, as they are not all alike, and it is easy to put the wrong mountings on the doors, which will cause a lot of confusion and frustration later.

Although there is a painting guide, with four views of the airplane presented in scale, these only include top and bottom and left and right side, with the gear up. There is no direct front view, and no large view with all of the doors and engine parts exposed. It would have helped if this information had been presented.

A decal sheet measuring 6 ½” x 8” provides a lot of decals for some of the detail painting that would ordinarily be required. Fortunately, these do not have to be trimmed. There are over one hundred individual decals, not all of which need to be used. Most are referred to in the instructions, but I had quite a few left over after the model was completed.

The kit comes molded in three runners in standard grey styrene and one clear plastic canopy and contains very little flash. Only one part was damaged in my kit, the nose of one of the guided missiles. This would have been easy to repair had I needed it, but this wasn’t a problem. Parts are easy to trim off of the runners.

This is definitely not a kit for inexperienced modelers, as there is a lot of detail, and the sequence of assembly is very important. Making the decision on whether to display the engine in VTOL mode or normal takeoff mode should be done at the beginning, as once you get started, you are committed and it is difficult to backtrack and correct errors. Some of the decals need to be applied fairly early in the assembly process, and some parts should be painted before they are assembled.

One issue I had with the assembly process was the detailing of the interior. The cockpit interior is basically all black, with a small amount of grey on part of the instrument panel, but the underside detail and weapons bay is, according to the instructions, supposed to be all white. There is an awful lot of detail inside, tubes and other components, and these probably need to be painted black, silver, or grey, but there is no mention of this in the instructions. Since my model sits on the gear, I just left the interior white.

Assembly is rather straightforward, but there is a little bit of filler required between the upper and lower parts of the fuselage, but this isn’t much of a problem. One good thing is that is it almost impossible to assemble this model with the parts mis-aligned. The only problem is that once the underside gear and weapons bay doors are installed, very careful handling is required or the doors will probably be accidentally touched and will come loose.

Painting is a rather easy step in the assembly process, since the entire airplane is basically “gunship grey”. Some portions are USAF Neutral Grey, but a lot of these parts, such as control surfaces, are covered by decals, although the decals for the rudders are just about the same color as gunship grey. The decals go on easily, and trimming is not a problem, although I could not find locations for all of the over 100 decals on the decal sheet.

The kit includes three different kinds of guided missiles and a set of drop tanks, and although information is provided for these, along with a small cart, called a missile trolley, the ultimate location on the six weapons mounts is not clearly stated. They do provide some decal markings for the missiles, however, and this is unusual for a kit of this type.

This is the first kit I have seen from Tamiya on the F-35 series, and since I am basically unfamiliar with the variants of the design, I don’t know how difficult it would be to convert the F-35B kit into the “A” or “C” model. We see USAF F-35A’s flying over the house on approach to and from Luke AFB all the time, but we are not close enough to notice any differences. I would suspect that Tamiya will release models of the F-35A and F-35C in the near future, as most of the parts are probably interchangeable.

Overall, this is a very nice kit, and although it requires a lot of time and expertise to assemble, it is definitely worth getting if you want a model of this aircraft. I would not recommend it for inexperienced modelers, but for the type of modelers most of us are, it should be no problem. Highly recommended.

Thanks to Tamiya, Phil Peterson, and Bill O’Malley for the review sample. You have made my quarantine time extremely productive.