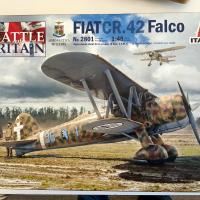 The Battle of Britain (BOB) brings to mind Spitfires and Hurricanes in swirling dogfights with the Luftwaffe's Messerschmitt's, Dornier's and Heinkel's in the summer skies over England in 1940. One of the lesser-known participants in the battle was the Regia Aeronautica (RA) or the Italian Air Force. In fact, the RA had participated in the invasion of France providing escort to bombing forces until France surrendered. From September to November 1940 the RA stationed two squadrons, the 85th and 95th of the 18th fighter group at Ursel Belgium. Here the CR 42 would prove unsuited to the task. Lacking the performance of modern fighters, the Falco's took a beating at the hands of the RAF. More critical was lack of firepower and the open cockpit that froze pilots operating in the cold air over the English Channel. One of the 95th squadron aircraft, serial 95-13 was shot down and landed virtually unharmed on English soil. It was test flown by infamous British test pilot Eric Brown who reported it an excellent aerobatic platform. That aircraft is preserved in the RAF Museum at Hendon today.

This is a reissue of the Italeri kit and includes six marking options, two which are BOB veterans. The other four are an 83rdSquadron aircraft based in Italy, a 77th Squadron aircraft based in Libya, a 23rd squadron machine based in Sicily and flight school aircraft based in Italy in 1946. The last version is the only without wheel spats and will be difficult to build because the unspatted gear parts are not included in the kit although shown on parts diagram. Detail is good for this scale. The cockpit is sufficiently detailed with a somewhat weak decal representing the seat harness. Assembly of the airframe has a few challenges. The first is the way the engine cowling is sectioned; the builder has to trap the engine in separate cowling sections with very thin edges and vague locating spots. I broke it open several times trying to get everything to fit. The second area was the wing struts. Granted, I don’t build a lot of biplanes and this one has more struts than most. I elected to spot glue the struts to the upper wing and rough fit the bottom till the glue set. Once the camo was done and I tried attach the struts, I found the fit was less than stellar and ended up doing a lot of touch up. I think better planning on my part would have produced a better job so I wouldn't entirely blame it on the kit. In short, don’t expect everything to fall into place.

WW II Italian camouflage is some of the most interesting and difficult to reproduce. For the bottom side I used Valejo model Aire silver RLM 01. The top side was a combination of Floquil Earth, Model Master RLM 83 and Humbrol Matt 62. The camo was applied with an Iwata Eclipse HP-CS using a .35 nozzle and needle. A gloss coat prepped the surface for decals. As is usual for Italeri, the decals are thin and apply very easily. I mildly weathered with exhaust stains, oil leaks and a wash to dirty the overall airframe up. A flat coat was applied to give the model a uniform finish. The last bit was rigging the outboard struts with easy line.

Italeri recommends this kit for 14 years and older builders. That might be a stretch considering the complexity of the struts and the camouflage patterns. The only easy (overall silver) marking option is taken out of the mix by the missing open wheeled gear parts. The struggle was worth the effort. This is a classic looking aircraft as most Italian designs of that era tended to be. If you have an interest in adding this aircraft to your collection, this a good kit to do it with. Thank you Model Rectifier Corporation for the sample kit and to IPMS for sharing it with me.