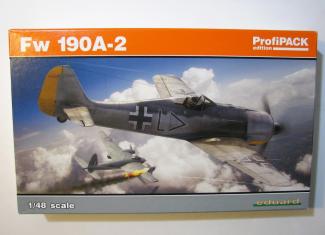 The first prototype of the Fw 190 took to the air on June 1st, 1939 but due to some minor faults (Ok, so there were enough problems that the RLM halted development) it was not accepted into the Luftwaffe until 1941. June 1941 saw the Luftwaffe accept the first 100 Fw 190A-1s that were armed with four 7.9mm MG 17s. November of 41 saw the next version, 190A-2, introduced with two MG 17s and two MG 151s of 20mm caliber in the wings. Part of this series received an additional pair of 20mm MG FFs. The A-2 was powered by the modified BMW 801 C-2 engine and problems with the engine rear bank of cylinders overheating were finally solved by the simple introduction of a ventilation slot on the two sides of the engine cowling as in the A-1 version. 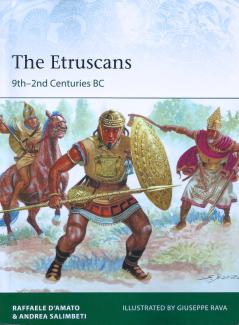 The Etruscans 9th - 2nd Centuries BC

The Etruscans are sometimes regarded as the fore-runners of the later Roman civilization, and they certainly appear to have had enormous influence over the development of that empire, and yet despite this, relatively little is really know today about them. Their language has only ever been partially translated and very little written documentation survives except later tomes by Romans and Greeks which are debatably accurate, to say the least. What is generally believed is that the Etruscans were something of an amalgam culture, having some seafaring antecedents as well as people from the Asian subcontinent and other places (which seems to suggest they were very much a merchant culture with extensive trade routes). However, there are other later writers who claimed they were native to the area of Northern Italy, so go figure. 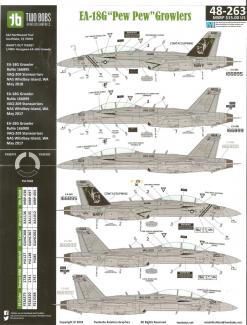 Two Bobs Aviation Graphics is one of leaders in aviation decals with an impressive variety in 1/32, 1/48 and 1/72 scale. This latest release has very interesting markings used by VAQ-209 with a “Star Wars” theme on the aircraft. A black/white Darth Vader helmet, the word “VADER” on the spine and VADER 1 (white decal hard to see in picture) on a black fuel tank are on the CAG aircraft. The line jets have a gray/white Darth Vader helmet (third decal sheet) on the tail. 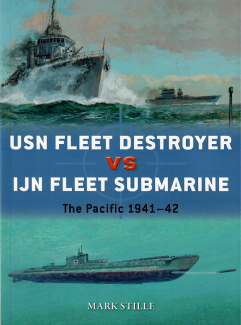 This book is number 90 in Osprey’s Duel series where they take two opposing forces and compare/contrast them. The two subjects are the Imperial Japanese Navy’s submarines verses the US Navy’s destroyers. The book explains the develop of both these forces before the attack on Pearl Harbor, then goes into greater detail of the next 13 months of fighting until the end of 1942.

The book starts with a four-page introduction detailing Japanese developing submarine tactics of using their force to attack US Navy capital ships in a war of attrition leading up to a decisive grand battle between the fleets. They developed large, fleet submarines that were over 300 feet long and had airplane hangers on them. Whereas, the US Navy’s destroyer force was not training is anti-submarine warfare, but rather using their destroyers surface warfare fighters. These two beginning war strategies did not serve either side well the first year of combat. 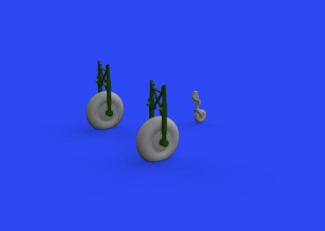 IPMS/USA again thanks the Eduard team for sending us more of their prolific output targeted toward improving already great kits. Thanks to Phil and John for obtaining the sets for the team…

This set is an upgrade to the 2018 release of the new-mold Airfix 1/72 Wellington 1a/c. Consisting of three parts, it is the two main wheel/tires as one part each, and the single-part tail wheel strut and wheel/tire assembly, and a masking set for same. On the kit the main wheels are split into two halves per old-school molding, which the resin items dispense with, having a casting block on the ground section of the tire. .