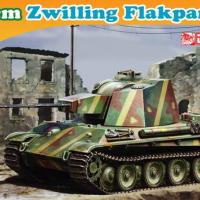 At the beginning of World War two the German Army had little need for dedicated mobile AA defence as the Luftwaffe enjoyed air superiorty. However after a short while it became more important for mobile AA defence as the Army realized that the Luftwaffe could not always provide a protective umbrella. A quick solution was to convert soft skin and half-track vehicles to provide this mobile AA defence, but it was also soon realized that many of these conversions left the crews exposed. It was then decided to mount more effective mobile AA platforms that would have fully enclosed turrets to protect the crews and improve overall survivability in the face of ever increasing Allied air supremacy. The Panther medium tank chassis was ideal for these future mobile AA defences, the 5.5 cm Zwilling Flakpanzer was one of many proposals that did not advance beyond the drawing board.

The 5.5 cm Zwilling Flakpanzer is part of Dragon’s 1/72 “Armor Pro” series. You get 79 medium gray hard plastic parts on three sprue trees with the lower and upper hulls separate (plus many parts not for use with kit). There is flash and the molds are showing considerable age as many of the parts have scarring especially the road wheels. The plastic is brittle with few parts broken on the sprues including one of the gun barrels (arghhh!!). You get DS tracks and to my surprise no etch grills as included in other Panther kits in this range. The instructions are illustrated with three sequences of assembly in 3-D solid pictures (I prefer the line drawing type of instructions). Each step shows the parts already assembled making it difficult to know exactly how they fit (not good for beginners) of course this may be a minor issue if you have built other Panthers and are very familiar with the type. The painting guide shows 2 hypothetical options. The decal sheet is small with just six crosses of various sizes, and no decal placements are shown on the painting guide.

The first thing to do was remove flash from most of the parts. Next was step 1; assembling the lower hull to the upper hull. I then attached engine insert followed by the exterior engine deck. I found these major parts to have some warping, I did my best to straighten them. Also in step 1 they suggest that you attach all the small bits such as pioneer tools, and spare tracks, but I left these off for later. The turret was then assembled, but I left off the barrels til last. The gun barrels were repaired and cleaned up then set aside. Most of the scarring and marring of the inner road wheels can be hidden behind the overlapping exterior road wheels which seemed to have few blemishes. This was my first time using Dragon’s DS tracks, all that was needed was slight stretching to make them the proper length, I then left these aside for painting and joining later. The rest of the construction was trouble free and next it was off to the booth for painting.

I didn’t like the paint schemes offered on the instruction sheets, so I chose another scheme I had seen on a late war Panther G from the internet. The scheme consisted of overall Olive Green with Dark Yellow disruption. I started by painting the Flakpanzer overall Gunze H405 Olive Green mixed with Tamiya Buff to tone it down. Then the disruptive camo of Tamiya Dark Yellow mixed with Tamiya Buff. I went back and forth with different shading of the main colors to simulate fading and wear. For the road wheels I painted a few of the outer wheels Dark Yellow and Red Brown to give variety and to suggest wheel replacements at repair depots. Next the DS tracks were painted a mixture of Tamiya Red Brown and German Grey, the exterior of the trackes were dry brushed with Floquil Grimy Black mixed with silver to simulate contact wear. All the little bits were then painted including the pioneer tools. I gave the whole surface a wash of Davies Grey mixed with Raw Umber water colors, followed by light scuffs and chips done with Valejo Dark Grey.

The DS tracks were attached to the chassis and glued to the top of the road wheels to simulate track sag. The DS tracks responded favourably to super glue. This is my first time using DS tracks and they met my expectations, I have heard a lot of good things about DS and I was not disappointed. The gun barrels were tackled last, these were painted Tamiya German Grey followed by dry brushing of Foquil Iron Black. I painted two white kill markings on each barrel to suggest some success in shooting down the enemy. Finally the barrels were carefully attached and aligned.

I primarily build 1/72 aircraft and don’t do a lot of armor, but I really enjoyed this kit. I can enthusiastically recommend this kit to all 1/72 armor fans especially those interested in the “What If’s”.

I would like to thank Dragon USA, and the IPMS USA reviewers’ corps for the opportunity to review and build the 5.5 cm Flakpanzer.

Turret Close Up
Previous Next