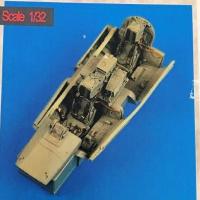 The Revell 1/32 Panavia Tornado has been around since the mid 1980’s and represented all variants from the GR.1, F2, IDS and ERC models. Both the RAF and German Airforce have been offered throughout Revell’s production runs. It is currently available as an RAF GR.1 in Gulf War colors. This aircraft has several nicknames: the “Fin” due to its enormous tail, and “Tonka Truck” due to its rugged, tough design. The RAF, German Air Force and the Saudi Air Force have operated the Tornado.

Aires Hobby produces 1/32 scale resin replacement cockpits, speed brakes and exhausts for both the Gr.1 and the IDS versions. The subject of this review was the GR.1 cockpit. It was packaged in a compact cardboard box that was very strong and protect the contents quite well. Most of the resin parts were contained in one zip-lock bag and I found some delicate parts were broken. The photo etch parts (PE) and acetate instrument dials were neatly protected within their own plastic sleeve with a stiff cardboard backing. The heavy, main resin cockpit “tub” was loose in the box and I suspect this may have helped contribute to the damaged parts. However, two foam pads were there to help protect the contents.

The instruction sheets were simple and relatively easy to follow, but it took me some time to figure out how and which seat harness to feed through which buckle on the shoulder harness. After looking closely at the plan view and following each belt, I worked it out.

The quality of the resin and the detail presented was simply stunning and certainly up to Aires usual high standards. I did a comparison of the Revell cockpit to the Aires cockpit and Revell should also be commended as the detail in their cockpit, in my opinion, was quite acceptable and appeared accurate. However, Aires did take their cockpit to the next level in terms of detail and finesse.

The instructions showed a shaded area on resin parts where excess resin and pour stubs needed to be removed. The “tub” fitted quite well between the forward kit fuselage halves, but, I had to do some trimming and further cutting to get a good fit of the kit nose wheel bay under the cockpit floor. See the pictures for more information.

The forward resin instrument panel included the coaming. A small part had broken off and I could not find it. I repaired the broken coaming with Evergreen plastic sheet which worked perfectly. The kit plastic coaming comes as part of each fuselage side and needs to be removed. While it was not difficult to work out, there is no mention of this in the instruction sheet. I first cut just the plastic coaming halves from each side, then taped the fuselage sides together trapping the Aires cockpit tub inside. I placed the instrument panel/coaming in the aperture that I just cut and carefully measured how much more of the horizontal plastic area that still needed removing. I also checked my progress, temporary fitting the windscreen, to make sure everything was going to fit perfectly. Quite easy, just take your time. The rear instrument panel was a simple drop in fit.

Both front and rear instrument panels were a combination of resin and PE/acetate parts. The PE represented the analogue instrument panels, while the acetate plastic sheets represented the instrument faces. These were sandwiched between the PE and resin.  I painted the back of these sheets white to bring out the brilliant dial details, which could actually be read under close magnification. Everything fit nicely and looks convincing under paint and a wash. While the instructions didn’t suggest any paint colors, there were plenty of good references online.

PE rubber pedals are provided for both cockpits. The instructions show the need for plastic rod to attach the pedals below each instrument panel. There are indents where the rod fits, however, I drilled deeper holes and inserted brass rods. The pedals were then super glued to the rods. Metal may have been overkill, but, those pedals are not going anywhere!

The Martin Baker Mk 10 ejection seats are a work of art and superior to the kit parts. Each seat is furnished with all the seat and parachute harnesses in PE. As mentioned, it took me a while to figure out the layout of belt part numbers one and two on the shoulder straps. I referenced pictures online as to how to paint each belt and found several different representations of belt colors. I settled on the most prevalent (green and brown) and used my best judgement. In the end, they look great to my eyes. The seats were painted and the belts assembled and attached. The ejection handles were some of the resin parts that broke and somehow I managed to lose these. I replaced them with the plastic kit parts. I painted the ejection handles yellow and then wound 3M (blue) painter’s tape, which I cut into thin strips, around the handles. These were painted black while still stuck to a scrap piece of glass. I find this method to far more effective and easier that trying to paint the black stripes. Two “rubber” hoses were attached to each head rest side as per the instructions.

I painted the entire cockpit Tamiya XF-19, Sky Grey, which looked close to pictures online. I picked out switches and knobs with black, white, red, yellow and grey. A medium grey wash followed to bring out the lovely detail.

The cockpit was finished with the additions of the side walls and canopy rails. These rails were glued to the fuselage cockpit sides and not the cockpit assembly to get achieve a better fit. The Acetate head up display glass and the six PE rear vision mirrors were not added at this point. With the cockpit completed, I installed the nose wheel well, made sure the cockpit was seated properly in its place and glued the kit forward fuselage halves together.

The end result looks fantastic! I couldn’t resist beginning assembly of the rest of the Tornado parts. The 35 year old Revell molds are certainly showing their age, but this “Tonka Truck”/”Fin” plus Aries cockpit will be a great addition to my model shelves.

I would like to thank Aires Hobby and the IPMS for the opportunity to review and build this great cockpit.

Tornado Taped Together
Previous Next