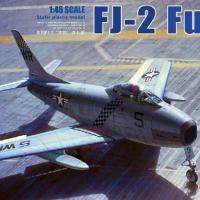 Whew, this was a strange one and I apologize up front to Kitty Hawk. They were nice enough to send us a sample and somewhere between them and us, the USPS lost the kit. Every effort to find it or get it back failed. In the end, I bought the kit as I really wanted it. More importantly, let’s look at the kit!

The FJ-2 Fury was the result of an effort to convert the USAF’s F-86 Sabre to a carrier-based plane. It included folding wings and a longer nose gear strut. Kitty Hawk has come out with kit KH80155. Inside the box, you will find three well-made gray sprues with recessed panel lines, a clear sprue, a small photoetch set for details and seat belts plus a decal sheet. With this initial release, Kitty Hawk also included two resin figures which are very nicely done.  Looking at the kit, the build is separated into front and back as the plane can be posed with each portion separate. I wanted a buttoned-up plane, so all the access panels and engine panels are closed off.

The start of the build is straightforward with the cockpit which is nice. The seat includes photoetch seat belts and looks good. The deck behind the cockpit is a little sparse but you can either dress it up with some strip/styrene or use the Hypersonic Models resin cockpit. I did not spend the money as I think the Kitty Hawk kit looks good. The side walls of the cockpit are also the gun bays. Make sure alignment and fit is good here especially if closing things. The intake trunk is next, and the nose gear and its wheel bay are part of it and need assembled here. Fit is good and there are not a lot of issues. Once done, the trunk and cockpit/gun bays are squeezed between the fuselage and things are closed up. Fit is excellent with no issues. I closed all the gun bays. I also added the nose too.

The wings are next, and I decided to place them in the folded position. Flaps and slats are separate, and the fit is excellent. Because I chose folded wings, I did not join the inner and outer wings yet. I also held off on the landing gear.

The rear of the plane is next and there is a nice representation of the General Electric J47-GE-2. Even if you do not want to display it, you need to build the engine as it is viewable from the rear of the aircraft and from in front. Once done, the engine is trapped in place by the rear fuselage. Do not forget the tail skid side walls also. From there, the tail assemblies are added. The fit is great.

One issue I did have was the tail hook. In dropped position, it is great but closing it up requires four small doors to be closed. This required some putty. Nothing egregious but a small amount of work,

Next, I joined the front and back fuselages and wings together. I added some extra strip styrene to help the rear fuselage align and added the wings. A little putty was required along the wing roots. The ammo mags were also closed and required a small amount of putty. I prepped the fuel tanks, canopy and the pylons and the plane and was ready for paint.

And this is when I got around to looking at the decals. The kit includes markings for the following:

All of these aircraft are natural metal, so I pulled the decal sheet out and looked. And it was for a helicopter. DOH. I could have gotten a new one from Kitty Hawk, but Caracal Decals announced two sheets due out in April including sea blue, a trainer and gull gray markings so I elected to wait.

And the virus hit and turned our world upside down. Caracal did come through albeit with a very much understood delay and I had decals for a trainer version form NAS Columbus, Paint was not hard but there was some masking involved between the white, orange and silver leading edges and going back and forth with touch ups.. Once done a clear coat and then the decals which were superb.

All that was left were the small fiddly bit- wing tip lights, canopy, landing gear doors and the like. Everything fit very well. I added some wash to the wheel bays and then flat coated the model. Lastly, I added the folded wings and a little more flat and done.

This is a superb kit and I look forward to another one. It is very reasonably priced, superbly detailed and fits well. Recommended to fans of naval aviation and anyone interested in the early jets.

My thanks to Kitty Hawk for the kit and the patience to see it finished!