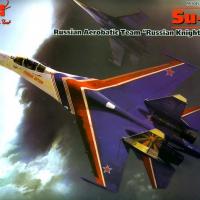 The Sukhoi Su-27, known to many in the west as the Flanker, is one of the Soviet forth generation fighters. It was designed to equal or surpass western fighters such as the F-14, F-15, F-16 and F-18. The Su-27 is larger and heavier then the similar appearing MiG-27 and provides excellent performance, easy handling and easy maintenance. It is a favorite at air shows due to its size and the stunning maneuvers that it can perform, including the “Cobra”.

This kit of the Su-27 features the markings of the “Russian Knights” aerobatic team and is produced by ICM Models. ICM Models is located in the Ukraine and produce aircraft, armor, vehicle and figure models in various scales. I am familiar with some of their WW II subjects and I feel that they make one of the best models of the Polikarpov I-16. Their Zvena kit is also pretty good.

I was a little disappointed when I opened the kit. The transparencies were not protected and had a couple of small scratches. This was easily fixed but could have been avoided. Also the instructions could have been better. They consisted of simple exploded view drawings and the images were very soft illustrations. The location of several parts had to be guessed. The plastic parts featured some fine panel lines but soft edges and a fair amount of flash on many parts.

The engineering of the kit varied. The fuselage was one piece, top and bottom with no locating pins and poor fit. The wings were also one piece and showed some large sink marks on the upper surface. Also, the wings mounted into slots in the fuselage, but the top surface of the wing was not level with the top of the fuselage. I tried to adjust the fit but could not correct this fault completely. The nose gear, on the other hand, consisted of nine separate parts (eleven with two pieces of stretched sprue that I added) and looked very good. The mounting location of the nose gear was not well defined. A better instruction sheet would have helped. I found it very helpful to have good reference material available during the build.

The cockpit consisted of a tub, instrument panel and a three-piece ejection seat. The seat was well detailed and included molded-in seat belts. There is no detail on the instrument panel or the side pods so I added some cockpit decals from a very old IPMS Decal sheet and some spots of paint. The mounting location for the main gear in the fuselage is well defined with a “D” shaped hole. Unfortunately, the top of the landing gear strut had a small pimple. Lots of super glue fixed the gear in place.

The instruction sheet showed in general how to paint the beautiful color scheme of the “Russian Knights”. Decals included specific markings for five different aircraft within the team. The decal sheet also included red/white stripes that separated the various red, white and blue areas of the scheme. I was tempted to try these schemes but I was concerned about the white of the decals being sufficiently opaque and my ability to get the angles of the scheme correct. I had a set of Cutting Edge decals with nice shark mouth markings so I used these decals. I painted the model with the three Model Masters Flanker colors but the medium blue and the blue/gray looked too dark. I lightly over-sprayed these colors with the pale blue color until the shades looked correct according to my references.

While I encountered problems with the kit, I am pleased with the final appearance of the model. I would not recommend this kit for beginners but with proper reference material, it can produce an acceptable model. I would like to thank Dragon Models USA for providing the sample.