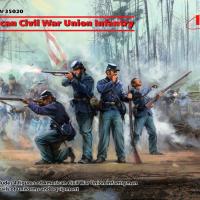 It never rains but it pours. The first company to release styrene figures from the Civil War was Dragon, which released a terrific set of Union soldiers in 1/32nd scale some decades back. Unfortunately, they never followed up with the promised Confederate infantry, as they apparently didn’t feel the sales merited it (hard to understand, as I literally bought a case of them for myself).

However, recently two different companies have suddenly released figures from that era – Masterbox and now ICM. ICM, in my opinion, has taken the lead in this arena by releasing BOTH Union and Confederate troops.

This particular set of Union infantry provides four soldiers, two firing their weapons, one reloading, and one apparently just having received return fire. Unusual for IM figure sets, this one does not include an officer figure. However, if you happen to purchase the Confederate infantry set from ICM as well, this includes an officer figure which is extremely easy to convert – just shave the braid off the sleeves and kepi, and give him a couple of shoulder boards.

When I saw these kits coming from ICM, I deeply, deeply hoped that they would follow the pattern of their World War 1 figure sets and include additional equipment on a separate sprue. In fact, they included TWO sprues of equipment, although ironically there is little information about this equipment in the instructions. With a bit of research I believe I THINK I know what they offer. All told, you get:

I apologize for going into such detail here, but these sprues provide you with ample extra equipment, which can then be used to customize additional figures or to enhance the somewhat lacking Masterbox set. In any case, the equipment permits a LOT more choices than would otherwise have been the case, and they are very welcome indeed.

All four figures assemble with a minimum of fuss, although most have two-part arms due to the complexity of the positions. A bit of putty is useful here. The figure of the wounded soldier is easy to modify into a different pose, if you find this one a bit disturbing. All look great and do a good job of representing the typical later-war uniform of the Union Army.

That being said, I’m a bit surprised that no one has yet to release a single figure in the knee-length frock coat extensively used by both sides earlier in the war. Doing so would provide even more conversion potential for these figures, but perhaps they will be released at a later date (one can hope).

The figures paint up exceedingly well and really look the part when complete. There’s lots of conversion potential, and I can guarantee I will be buying extra sets to make some of the more colorful examples from that terrible war. I cannot recommend this set highly enough for anyone interested in this remarkable period in American history. With luck, ICM will continue along this line. Wonderful!

Many thanks to ICM for taking a shot at this particular market, and to IPMS/USA for a chance to play with these lovely figures. Happy modeling, everyone, and stay safe!