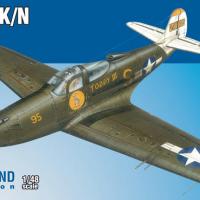 The Bell P-39 Airacobra was one of the principal American fighter aircraft in service when the United States entered World War II. The P-39 was used by the Soviet Air Force and scored the highest number of individual kills attributed to any U.S. fighter type in the Eastern European theatre. Other major users of the type included the Free French, the Royal Air Force, the United States Army Air Forces and the Italian Co-Belligerent Air Force. Designed by Bell Aircraft, it had an innovative layout, with the engine installed in the center fuselage, behind the pilot, and driving a tractor propeller via a long shaft. It was also the first fighter fitted with a tricycle undercarriage. Although its mid-engine placement was innovative, the P-39 design was handicapped by the absence of an efficient turbo-supercharger, preventing it from performing high-altitude work. As such it was rejected by the RAF for use over Western Europe but adopted by the USSR where most air combat took place at medium and lower altitudes.

Together with the derivative P-63 Kingcobra, the P-39 was one of the most successful fixed-wing aircraft manufactured by Bell.

The kit is produced by Eduard, a well-known company who is known for producing quality mid-range priced model kits. The box artwork in outstanding and shows the P-39K/N in flight. This kit belongs to Eduard 1/48 “Weekend Edition”.

The kit consists of over 140 parts and comes on three gray sprues, one clear spruce, and one sheet of decals. The parts are nicely molded with no flash what so ever. All panel lines are engraved and all the sprues have small gates. The instruction manual comes in the standard Eduard booklet with 12 pages of instruction. The guided assembly starts with cockpit and progresses through the fuselage, wing, landing gear, and propeller assembly.

This kit is a high quality designed kit so the fit is outstanding! I chose to build the kit using the suggested steps and did not have any real issues at all. I did find that the wing to fuselage joint required some filler. I did also find a large gap between the front wheel well back firewall and the bottom/sides of the fuselage. There is also no engine included with this kit. So the interior of the front wheel well is a blank hole towards the front of the aircraft. You really can’t see it unless you use a flashlight (as would be used in a contest) so it needs to be sealed off. However, this does make a good location for all the weight that needs to be added to prevent the kit from being a “tail sitter”. Included in this kit is the option of weighted or unweighted tires. But the tires were found to be a little too wide and required thinning. The cockpit is a little sparse for detail but this is weekend build kit so all that is included is a decal for the instrument panel and decal seatbelts. There are two different propeller assemblies with this kit. Since I was building “Toddy III” I built the three-bladed propeller assembly. There is also the option of an external fuel tank or a single bomb. I chose the fuel tank.

There is no photo-etch included in this kit.

There are two painting options with corresponding decals. I chose to paint the aircraft in the markings of Toddy III flown by Capt. G. A. Hilbert. I choose Tamiya paints to paint all of the aircraft.

There are two decal options. One for Lt. W. McDonough 40th FS, 35th FG, Port Moresby, New Guinea, February 1943 “Toddy III”. And the other for Capt. G. A. Hobert, 41st FS, Tsili Air Base, New Guinea, September 1943. The decals lay down with no problems at all. No silvering was encountered.

Overall the kit is a joy to build and builds into a handsome model! The fit and detail are outstanding with little filler required.

My thanks to Eduard, and IPMS USA for the opportunity to build this great kit. I look forward to building more Eduard kits in the future.