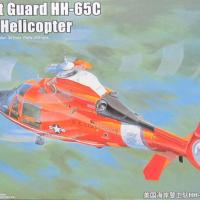 The HH-65C used by the US Coast Guard (USCG) is derived from the civilian Eurocopter AS365 Dauphin. The USCG selected this helicopter in 1979 and entered service in 1985.as a short range recovery Air-sear rescue helicopter. A total of 102 aircraft were manufactured and are still in service today. One distinctive feature of this aircraft is a “Fenestron” ducted fan anti-torque tail. This design improves safety for crews and the airframe itself from tail rotor strikes. The HH-65C carries a crew of 4 which consist of a pilot, copilot, flight mechanic and rescue swimmer. In addition to search and rescue, the aircraft tis also used for homeland security patrols, cargo/drug interdiction, ice breaking and pollution control.

Trumpeter issued a 1/48 scale version of the HH-65 many years ago and it was music to the ears of helicopter modelers that they produced this subject in 1/35 scale. The kit have very nice details that modelers will enjoy showing off in their finished builds. With that being said, I do see some areas that can benefit from aftermarket items and good old scratch building. The kit is large in size but not huge and probably ideal in proportions in my opinion.

Construction starts with the cockpit and cabin area and is fairly straight forward. The seat shoulder harness, which is photo etch is nice however the shape does not match any photo references that I could find. I modified these to match some reference photos online by cutting the straps in half and adding them to a buckle and extending them in length. One area that I was disappointed in is the lack of color references throughout the kit. Very few items indicated the color of parts or area were incorrect (center console should be black). There are plenty of online photos to get that information on what to paint in most areas. Decals are provided as options on instrument panel and console if desired. The only instrument decals I used were the individual instruments themselves that I used a hole punch to cut out. One thing I noticed in the cabin is the fire extinguisher. It did not match any reference photos of what the USCG uses.

Next is the window installation and one odd thing I noticed on the LH pilot (copilot) door. The lower door window is filled in with no option to put a clear part in like the RH door. Nowhere can I find a reference photo of this window being filed in. The profile where a window should be is there but inside the door is solid plastic and no clear part. Scratch builders will be able to add a window but as thin as the plastic in that area, it will be a challenge. There is also no detail for door handles on any cabin or crew door, not even a decal showing handles.

Once the cabin is assembled and the Fenestron gear box & fan blades sub assembly is complete, the fuselage halves can be assembled. There is an open area on where the drive shaft goes into the gear box that I used a piece of half round to fill. Not sure if this is something Trumpeter just left off the design or missed but it is a simple fix.

Next in the assembly (per instructions) is the engines and transmission assemblies. This area of the kit is extremely detailed and impressive. Please take time to study the instructions carefully to make sure you do not mix left hand parts with right hand parts, they are very similar. As with the cabin, color references are lacking if not even called out. There are two areas that I deviated from the instructions and modified the parts slightly in this area. First is the cabin roof, which is the base of the engine bay. The locating holes for the transmission and engine will be visible from inside the cabin so I glued a very thin sheet of plastic to the cabin roof to hide these holes. I also installed the cabin roof after the fuselage was installed before adding the engine components. Finally there was something odd about the rotor head and rotor shaft assembly. Most if not all helicopter kits that I know of all, have the rotor designed so the rotor can easily spin once assembled. The rotor on this kit has a very shallow “cup” or relief that you can locate the rotor head but if you glue it, it will not rotate and if you do not glue it, the rotor will easily fall off. To fix this, I used some plastic tubing to make a longer pin and socket to allow the rotor to turn as required. I made a similar modification to the tail rotor.

Final assembly went fairly smooth but again, a few items that or worth noting. There is a half circle (looks like a foot step) between the pilot door and crew entry door. The USCG helicopters have a tie down hook here instead of a look. Another assembly area of concern is with the winch installation. There is a small anchor with a small pivot hole that is glued to the fuselage. The arm that joins the winch to the anchor should have a mating pin to go in that hole since the actual winch assembly can be rotated. The arm is missing that pin and I can see that easily be broken off. It is a simple fix to adding a pin using round plastic rod. The right hand cabin door is missing door slides and as all the other doors, and handle details. On the base of the tail, there is a skid plate, the instructions show it as if it fills the hole however reference photos show this extended down as a tail. I am not sure if this is something that is fixed or is movable on the real aircraft. Final note on the rotor Blades, first mine were very loose and shims were required. Next on the blades is the droop that Trumpeter put in them were far more excessive than any reference photo I could fin. It was almost as if there were molded with tie downs pulling them down to where a pilot could touch them. That is an easy fix to straighten them out back to a slight natural droop.

As noted earlier, paint notes not included is the only complaint. The rest of the painting is fairly easy but there is a few items that would have made it easier. It would be nice if someone offered a vinyl mask set, especially for masking the round ducted-fan area and to assist in painting the white band which will help prevent the orange base coat to bleed through the decal. The other area I wish Trumpeter included was a separate view of the rotor on the paint guide and remove the rotor from the top helicopter view. With a dedicated rotor view, dimensions or a measurement guide would be useful on where to paint the color bands. The reason to remove the rotors from the top view is there are a few decals that are not called out because the rotor hides them (number 52 on cockpit roof and no step marking on cowling).

The decals are very nice and are very thin, following the contours nicely. I did cut the decal “danger” into a few pieces to help it follow the tail rotor gearbox contour.

Finally a 1/35 version of this iconic aircraft is available and Trumpeter did a good job with this subject. With just a few areas for improvement (paint references, masks and rotor rotation), this kit will easily build into a magnificent model.

Many thanks to Stevens International for providing this kit to IPMS for review.