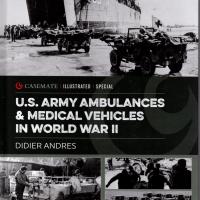 This book covers the search for and the development of all types of ambulances, medic jeeps, medical trucks, and litter carriers used by the US Army during World War II. The book details many modifications made in-theater to vehicles, and other missions for medical vehicles including use by the American Red Cross and American Field Service.

US Army Ambulances & Medical Vehicles in World War II is part of Casemate’s Illustrated Special Series that uses hundreds of B&W photographs, color illustrations, and diagrams to provide a wealth of information for the historian, modeler, or researcher.

Author Didier is passionate about military history, in particular American vehicles of World War II. He has accumulated an impressive collection of technical documents and photographs on the subject, which he has shared through his writing, both books and magazines, over the last two decades.

The book is divided into 16 chapters describing medical vehicle types and missions during World War II:

This is an excellent and thorough reference work for US Army ambulances and other medical vehicles during the Second World War. The photographs, mostly black and white, are clear and good representations of the vehicles and their uses. The text is well written and provides clear descriptions of the photos and background of the ambulance vehicles.

Thanks to Casemate Publishers for producing this excellent resource and providing the review sample to IPMS.

Field Ambulances on the Front