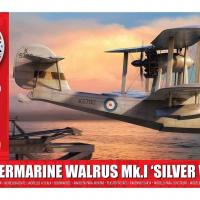 The Supermarine Walrus (originally known as the Supermarine Seagull V) was a British single-engine amphibious biplane reconnaissance aircraft designed by R.J. Mitchell and first flown in 1933. Designed for use as a fleet spotter to be catapult launched from cruisers or battleships, the Walrus was later employed in other roles, notably as a rescue aircraft for aircrew in the sea.

The cockpit was assembled along with other parts of the fuselage sides (the whole fuse is in four different sides). I added photo etch seatbelts to the navigator, observer and pilots’ position. There is only one pilot's position so no area for a copilot. Assembly was not an issue, make sure you get the pilots seat frame and bulked slotted firmly in the cockpit floorboard because the top of the fuse interlocks with the bulked and if the seat is not completely down the top of the fuse will not fit.

the fuse was assembled in 4 sections top bottom and two sides. I painted the interior with RAF interior Green and weathered it with a wash. There are two table tops in the fuse one belonging to the navigator, so I painted the tops with a yellow ochre and then dotted the tables with Van Dyke Brown and streaked that to give the table a wood grain. When that dried I sprayed the tables with Tamiya transparent orange.

To assemble the fuse and get it straight I used a number of adjustable clamps to hold the four sections together. I started the assembly from the tail and worked toward the nose gluing and clamping as I went.

The wings went together without any problem again I glued and clamped the wing starting from the tip to the root.

The airplane can be built with wings folded or extended. I chose to build the wings extended. I had a problem with the left side wing in the fact that there are just two small “nubs” that connect the wing to the fuse. When the upper wing was attached to the engine mount the struts on the left side gave the lower wing more support. With the small amount of joining material on the wings to the fuselage, I think the model would be better built with the wings in the folded position.