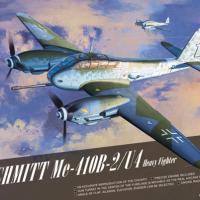 The Messerschmitt Me-410 was a German heavy fighter used by the Luftwaffe during WWII. The Me-410B-2/U4 was used as a bomber-killer. It was armed with a 50 mm BK5 cannon and employed to combat heavy bombers. Though powerful, the BK5 cannon was found not practical in actual combat operations.

Meng has chosen to offer the Messerschmitt Me-410 as its first kit in 1/48 scale, and it is a welcome choice. The parts are molded in grey styrene, with no flash and exquisite surface detail. Also included is a small PE fret with a few details like seatbelts, radiator grille faces, and gun sight supports. Given the sprue breakdown and some indentation in the bottom wings (to open holes), it’s suggestive that there are plans to release different versions of the Me-410 in the future.

My first impression upon opening the box was that this is a quality kit. My impression after having built it, is that is it a very high quality kit that deserves to be treated with proper respect.

Construction starts with the cockpit and gun bay. Both sub-assemblies are very nicely detailed and they will benefit from careful painting. Mind that, if you build the gun bay closed, most of the detail will be lost forever inside the kit and not really visible. The opposite applies to the cockpit, although the radios in the rear-gunner position will be difficult to see. At the same time, a very visible aspect of the model is the heavy cannon and its muzzle display exquisite surface detail.

The kit features two wing spars that are assembled underneath the cockpit and set the fuselage width. They also provide strength to the whole fuselage assembly and give a good grip for the wings.

Assembly of the interior parts is simple, until you’re ready to close the fuselage halves. There are two main sub-assemblies (pilot and rear-gunner positions), plus the wings spars, the gun control for the rear gunner, and the back canopy frame. Putting all that together requires several rounds of dry fitting to make sure everything is aligned.

The Messerschmitt Me-410 had a very unique arrangement for its defensive weapons, using two barbettes in the fuselage sides that could be rotated up, down, or out. You can leave them off until final assembly as long as you keep the bottom fuselage panel off. It makes painting and handling of the model much easier, and the bottom fuselage panel fit to the fuselage is excellent and gap-free. The guns muzzles are hollow, adding to the overall realism and detail of the kit.

The canopy is a multi-piece part, composed of two sides, two top parts, two hatches, and a windshield. Certainly, the canopy was the most challenging part of the whole kit, both to mask and to assemble. Simply put, it would just not fit. I had to sand and re-shape both hatches to get them to fit. I also had to add a plastic shim to one of the top parts. Once assembled, it does capture the Me-410’s profile well and is surprisingly strong.

The wings are a pretty straightforward affair. I left the ailerons counter-balances off the wings until final assembly. I was worried I would knock-them off during painting. You get to choose to assemble the wing radiators in the open or closed position. You also get the choice to build both engines exposed and could have the engine cowls removable.

I choose to build the model with the engine cowls closed. I am not good enough at wiring and painting engines. However, I should say that the engines do have good surface detail, and a super-detailing modeler would have a field-day there.

The instructions call to leave the wings off the model until the last step. I actually dry-fitted them to the fuselage, and fit was excellent. They slide firmly into place even when the wing spars don’t seem to be long enough. Based on that, I chose to paint the wings and fuselage as separate subassemblies and assemble the wings to the fuselage as part of final assembly.

Painting was accomplished with Model Master Enamels and it was free-handed with a combination of a Badger 105 and Badger 200 (Fine) brushes. I only masked the fuselage band.

Decals were applied over a Future coat and they behaved flawlessly. They are thin yet strong. I did not use any decal solution anywhere, except with one of the propeller decals. It responded well and conformed to the spinner with just one application of MicroSet.

As I was moving towards the final stages in assembly I was noticing the model was heavier that I would have imagined. I had the chance to use a white metal replacement landing gear (reviewed separately) and I was pleased by that. The plastic landing gear will probably be fine, but it was nice to have the aftermarket white metal option.

The wheels are very nicely done and detailed with raised surface detail on the tires with the name of tire manufacturer. Note the tires are not weighted.

After the clear coat was applied, I removed the masks and, to my despair, some flat coat had found its way under the canopy, fogging the inside of clear parts. It was due to a small gap between the pilot hatch and the windscreen, due to the ill-fitting clear parts. I probably can pry open the hatch, sand the interior side of the hatch and polish the clear part again – but that will be done at a later time.

I wish the canopy would have been easier to assemble and had an overall better fit. Same applies to the front window. Also, for the price tag of this model, I wish a decal mask set had been included.

But don’t let my critique on the clear parts turn you away from this model. Actually, the clear parts were the only challenging part of the whole kit. The overall fit of the kit (clear parts excluded) was outstanding. I only used a negligible amount of filler along the fuselage spine – mostly due to my own fault when removing the part – and none in the wings and tail. Surface detail is very good, perhaps a bit deep in the side panel lines, but they take a wash nicely.

I congratulate Meng for the surface detail, quality, and good engineering of this kit. Treat this kit well and you will be rewarded with an outstanding model.

Given the problems with the clear parts and the complex alignment of all the interior parts, I recommend this kit to experienced modelers.

I would like to thank Stevens International and IPMS/USA for the review sample.