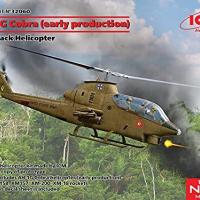 ICM has produced an excellent model kit for the fearsome Vietnam-era AH-1G Cobra helicopter (early version). With new molds, this kit is engineered and molded to contemporary standards. ICM has provided the modeler with many options for ordnance, service bay access, as well as open canopies. Markings have been provided for 4 schemes. The kit has eliminated most of the constructability problems of the old Revell/Monogram kit, but it still has a couple of spots that require special attention. The instrument panel details provided are inadequate for a kit of this quality.

Overall, this is an excellent kit. Aftermarket kits are already available to address its few weaknesses and enhance its already excellent detail. Anyone interested in modeling helicopters or Vietnam War subjects will be attracted to this kit. We should expect to see many of these models on the contest tables in upcoming years. Many thanks go to ICM for providing this kit to IPMS for the review. Natalie Mathes took the photographs of the kit elements and the finished build.

The Bell AH-1G Cobra attack helicopter is one of the most iconic vehicles of the Vietnam era. Bell had proposed a lightweight attack helicopter design in the late 1950s which the Army dismissed. Despite this rejection, Bell continued to work on a second design, one funded with its own money, that incorporated as many parts as possible from the incumbent UH-1s into a design that was highly informed by that of the British Spitfire fighter plane.

As the Vietnam War escalated, the US Army installed more and more weaponry on its UH-1 Iroquois transport helicopters. When the US Army recognized its need for a dedicated attack helicopter, Bell was ready with the AH-1 (Bell 209) prototype. The final design was completed in only eight months. The Army accepted the AH-1G in 1966 and by June 1967 the first Cobras were going into service. Bell built over 1,100 AH-1Gs between 1967 and 1973, with approximately 300 of them being lost to enemy fire or accidents in Vietnam. The Marines used the AH-1G for a short time in Vietnam before switching over to the twin engine AH-1J. Combat experience led to the improvement of the Cobra during its time in Vietnam, especially its increased firepower. After the War, the AH-1 continued to be upgraded and saw action in various theaters until it was retired in 1999.

What You Get in this Kit

The kit is protected by a large, heavy-duty box. The box art is sharp and pictures a “Snake” in combat over South Vietnam. Five gray plastic sprues are provided: three for fuselage parts and single items and two for weapons and paired parts. In addition, there is a sprue of clear parts with the canopy sections and various lights. The cockpit detail includes the armored panels for the two crew positions as well as individual seat cushions. Four types of ordnance pods are provided: an M18 mini-gun pod along with M157, M158, and M200 finned rocket launchers.

Three weaponry options are available for the chin turret: single minigun, dual miniguns, or a minigun/grenade launcher combination. The service doors for the Lycoming engine gearbox bay can be posed open on both sides of the fuselage. The canopy panels for crew access can also be shown open. The wheels assemblies and structure for towing the helicopter on the ground are also provided. There are many extra parts, many of which are undoubtedly for ICM’s late version AH-1G that will be released in late 2021. No crew figures are included.

The decal sheet is large, colorful, and comprehensive. In addition to unit markings, many small stencils are included. The instructions are accurate easy to follow but lack guidance for the exact location of the stencils and some detail parts. They include templates for canopy masks and color pictures of the four paint/marking options. Another nice feature is a chart that gives the modeler the correct combinations of the ordinance options provided in the kit.

This kit’s parts fit well and make the kit much easier to build than the venerable 1969 Revell/Monogram kit. The kit, ICM’s first helicopter subject, has remarkable detail, with appropriate raised rivet and panel line details. While some have expressed disappointment that the kit was in 1/32 scale rather than 1/35, 1/32 scale is the more traditional aircraft scale and will make this kit a good fit in large aircraft collections.

The instructions are clear and have no mistakes regarding part numbers. However, they lack orientation guidance for a few parts (C41, D93, D85, D86, D89) such that you will need to consult references. The paint color callouts for various parts are spotty and not always accurate per references. As noted, you will need to consult references to correctly locate the various stencils. My primary references were Wayne Mutza’s AH-1 Walkaround and Lou Drendel’s Gunslingers in Action.

The recommended build sequence will be familiar to aircraft modelers: cockpit/internal details, close fuselage, wings/external detail, canopies. The parts were accurate to the photos of early Cobras with only a couple of exceptions. In one example, the seat cooling hoses (D15, D16) are somewhat undersized per reference photos.

I did find it necessary to add bits of Evergreen sheet to fill the gap between gunner’s instrument panel and housing (Step 8), to fill the opening in the gun turret (D38, step 32), to strengthen the joints where tail section joins the fuselage (steps 20, 21), and to fill the gap at the back end of canopy part E11 (step 54). There were a couple of problem areas that required extra attention due to poor part design. The worst of these are the fit of the rear cockpit panel (A5, step 24) and the engine exhaust into the fuselage (C41, C50, steps 26, 35). Special care must be taken to properly align the gearbox assembly within the fuselage halves (step 23). The nose assembly fit with the cockpit is decidedly better than the Revell/Monogram kit, but it still required a bit of filling and sanding. The transmission access panels needed some work to fit properly in the closed position (steps 60-63). The main rotor linkage is quite delicate (step 70).

Being able to pose the canopy sections open for crew access is a nice feature of the kit. Unfortunately, the instructions are vague as to exactly where the support struts go for the open canopy panels (steps 56, 57). Here again, you will need consult your references.

The plastic used for the kit seems a bit softer than normal. This softness was probably necessary to achieve the crisp detail in the parts, however it made it difficult to cleanly drill out the small gun pod barrels (D17, D81, steps 32, A). To prevent the model from becoming a tail-sitter, weights were added in the nose turret (B8, step 32) and front portion of the belly panel (C23, step 30). I used brass wire inserts to strengthen the connection of the skids to the fuselage (step 52).

The most disappointing elements of the kit were the decals for the two instrument panels. They did not conform well to the molded detail of the parts. I ended up painting the details on the instrument panels after I removed the decals. A better option might be to use the instrument panel parts provided as templates and cut out flat pieces to apply the decals to. The decals are colorful and accurate per references. They seemed a bit thinner than average. However, I had some trouble getting the national insignia decals to settle down over the rivets on the tail boom. An application of decal setting solution was needed for these markings.

The kit detail is very good but, as always, can be enhanced. The cockpit detail provided by the kit is approximately what can be attained by the application of the various aftermarket kits to the old Revell/Monogram kit. To add a bit more detail in this model, I added seatbelts, pedal adjustment knobs, some small cockpit details, and a muzzle facing for the turret minigun from the Eduard photo-etch kit (32016) which was designed for the Revell/Monogram kit. A cockpit fire extinguisher from the Cobra Company resin detail set (CC32001) was also included. The pilot’s gunsight provided in the kit is inaccurate and poorly detailed, so I replaced it with one from the Cobra detail set and added a small piece of clear plastic sheet to it. Crew helmets from the Dragon US Helicopter Crew (Vietnam) kit (DML 3311) were also placed in the cockpit.

The instructions did not provide any guidance regarding the textured surfaces on the upper surfaces of the winglets for maintenance access. I masked these per references and sprayed them with black Rustoleum® textured paint. The model was painted in the camouflage scheme described in the instructions. Moderate weathering was applied. In addition to the excellent kit markings, I added some Vietnam War graffiti decals from MEC. Even though the kit instructions included templates for the canopy masks, I used pre-cut masks from Dead Design Models (NM32002). The ordnance pods were weathered differently than the rest of the model to reflect reconfiguration based on mission requirements.

Included in this review are photographs of the kit components as well as pictures of the completed model. In addition, I have also included a couple of in-progress shots of the transmission bay and cockpit (prior to installation of canopy). The model is very fragile, especially the open canopy doors and rotors, so I attached the model to a simple base in order to protect during transit.

A First-Class Kit with Opportunities for More Detailing

ICM’s AH-1G is the first large scale kit of the Cobra in decades and it is very well done. It meets the standards of modern kit design, manufacturing, and detailing. The options and extra details provided in the kit make it a natural for super-detailing and dioramas. The kit was fun to build and resulted in a nice-looking model. I highly recommend it.

As noted, there are opportunities for improvement. The instrument panel details certainly need upgrading. In another example, the attachment hardware details for the ordnance pods on the wings are not provided. The ability to expose the gearbox bay internals literally opens the door to more extensive detailing of the drive train. As one would expect, vendors such as Eduard and Microdesign are already marketing aftermarket detail kits which will enable modelers take this outstanding kit to an even higher level.

My thanks to ICM and IPMS/USA for the opportunity to review the kit.