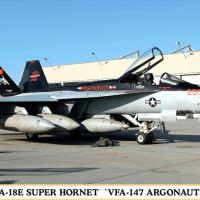 The F/A-18E/F Super Hornet is a similar, yet fundamentally different, follow on to the F/A-18A-D “legacy” Hornets. Entering production in the late 90s, the Super Hornet, or “Rhino” as it is known in the fleet, improves upon many of the “legacy” Hornets’ shortcomings, most notably fuel capacity. The Rhino also increases power and payload over the Hornet, as well as offering updated avionics. Visually, it’s distinguished from the “legacy” Hornet by large squared-off stealthy jet intakes replacing the previous oval-shaped intakes, as well as the aft fuselage and wings being bulkier and larger overall. Ultimately, the Rhino is positioned as a money saving jack-of-all-trades for the US Navy, replacing the roles served by venerable aircraft such as the F-14, A-6, S-3, KA-6D Tanker, and in the guise of the EA-18G, the EA-6B.

Those familiar with Hasegawa’s Super Hornet will recognize the contents of this limited edition kit. There are 118 parts on 1 clear sprue and 11 light grey sprues, as well as a set of black polycaps to mount the movable horizontal stabilizers. One nice surprise is the upper fuselage depicting the Block II Super Hornet’s new exhaust stacks. Set between the canted tails, there are five thin angled stacks on each side of the spine, replacing the recessed vent on the Block I aircraft. A careful inspection of the area reveals no mold lines or any other flaws from this modification. I find myself wondering if this is a new mold or if the existing mold has been altered, and if we’ll start to see the Block II fuselage in the regular production kits? Your Block I-based kits may soon become a rare item!

Another nice treat is the inclusion of a small amount of armament consisting of 2 AIM-9X Sidewinders, 2 AIM-120 AMRAAMs, an AN/ASQ-228 ATFLIR targeting pod and pylon, 4 480 gallon fuel tanks, and 2 double ejector racks.

The meat of this limited edition kit is a Cartograf-printed decal sheet representing two VFA-147 Argonauts CAG schemes, one from 2010 and one from 2011, both on the same Super Hornet, BuNo 166437. The 2010 paint features an overall two-tone grey with orange markings, while the 2011 paint (as depicted on the box art and in this review) is the same overall two-tone grey with a black spine and vertical stabilizers along with orange markings.

Hasegawa has taken the approach of molding a single base kit to represent both the single seat E and two seat F Rhinos. This means that ultimately you’re converting from an F to the E model as you build.

Starting with the cockpit, the tub is a single piece with both front and rear cockpit areas. As is typical with modern Hasegawa kits, there is no molded-in detail for either the instrument panel or the side panels. Instead, the panels are represented by black and white decals. The ejection seat is a simple part with some basic detail, but has nicely included decals and the upper seat belt harness molded in.

To make an E model, you're required to glue a plug over the F model rear cockpit and fill the mounting slots for the rear cockpit instrument panel cowling. The cockpit plug fits well, but will require some filling, and the cowling slots are best tackled by creating your own styrene plug. You'll want to take great care filling and sanding these plugs as they will be on full display under the canopy glass. However, do note the canopy requires its own attention as there is a mold line running the entire length. This is a result of the molding process that gives the canopy a true-to-life bulged profile, but you’ll need to carefully remove the mold line and then sand/polish the canopy back to clear.

You're provided with the canopy actuator (part Q5) if you're building the cockpit in the open position; however, there is no part provided for the closed canopy, which leaves the rear of the cockpit looking very bare. I chose to modify the open actuator into the closed position, which added a need for a bit of detail work to the empty area. Additionally, I used a bit of Hasegawa polarizing film and Tamiya clear green paint to add some life to the HUD at the front of the cockpit.

Following the cockpit assembly, the next steps are assembling the 3-part nose and mating it to the upper and lower fuselage. Before you start the assembly, there are several panel lines and various lumps and bumps on each side of the nose that need to be removed to represent a Block II aircraft.

You'll now need to bring these 5 pieces together and it can be a challenge. Take your time, because misalignment will be very tough to remove without destroying the surrounding detail. Despite my best efforts, I ended up with a step between the upper fuselage and the nose where they meet ahead of the cockpit.

You'll also run into the need for precise alignment while assembling the intakes. They are formed by a small inner part and a long outer part, which runs from the intake opening all the way to the horizontal stabilizers. It's far more critical to get the alignment right at the rear of the aircraft. You will have to work carefully, mating the inner and outer intakes. Even then there are large gaps, especially on the top side of the intake. Expect to spend some time and gap-filling CA to get these to a passable state.

In reality, the intake as a whole is quite messy. There is about a half- inch of depth, but no backing, instead terminating at the landing gear wheel structure and the open fuselage cavity. If you can't live with this, a FOD cover would be a good option, or perhaps even aftermarket intake piping, but they would require a great deal of surgery.

The remainder of the build is fairly straightforward. You’ll want to take care to align both the wings with the fuselage and ensure they have an even dihedral, as well as aligning the wingtip Sidewinder launch rails. Additionally, those mounting the ATFLIR pylon and pod may want to do so with the adjacent landing gear strut and wheel tacked into place as it’s a very close fit!

After painting and decaling were completed, final assembly went very smoothly. The landing gear is solidly mounted as well as the nose gear doors, although the main gear doors can be a bit fiddly to install. Somewhat annoyingly, each landing gear door features 2 ejector pin marks on the inside face. They are removable with a bit of work, but an unwelcome oversight on a relatively modern kit. The vertical stabilizers were left off until the end based on the chosen paint scheme, and were very easy to locate positively and CA into place with no worry about glue spilling over onto the fresh paint. The horizontal stabilizers were even easier, press fitting into polycaps to allow positioning.

The 2011 CAG scheme for the Argonauts is the standard Light Ghost Grey/Dark Ghost Grey Super Hornet scheme accented with a striking black spine and vertical stabilizers, all highlighted with orange markings. The basic painting separates the two greys at the wings. There is a slight intrusion of Dark Ghost Grey onto the lower fuselage between the rear of the wing and front of the horizontal stabilizer, but it’s fairly easy to mask. Masking off the black spine also proved surprisingly easy – simply following the contours of the spine/fuselage joint was the perfect guide, confirmed later when applying the orange pinstripes decals separating the grey and black. Helpfully, the vertical stabilizers were entirely black, and I chose to leave these separate from the aircraft until after painting and decaling. Painting was done with a mix of Tamiya Acrylic and ModelMaster Acryl paints; however, I tried a new technique, thinning the paint around 50/50 with Testors Metalizer thinner. This goes on very hot, and is touchable in around 5-10 minutes. Provided you’ve prepped your surface by cleaning and priming (I used Tamiya grey primer in a spray can), the finish is durable and masks well. Additionally, I used Testors Metalizer paint for the exhaust cans, which went on easily and buffed nicely, but was not resistant to handling until overcoated.

The Cartograf-printed decals were very well done, crisp and in register. The orange decals were particularly striking and seemed to be printed over a layer of white to avoid bleed-through, as they remained bright and opaque even over the black paint.

Additionally, the decals accurately seemed to capture the metallic nature of the silver used in several areas. All of the decals responded nicely to Micro Set and Sol. The most challenging part of decaling was the thin orange pinstripe running the length of the fuselage spine, separating the black and grey. Proper positioning took about 30 minutes, but once set, looked fantastic.

Despite the challenging fit in several areas, I found Hasegawa’s Super Hornet kit to be a rewarding build, although it could be frustrating for inexperienced builders. The real treat was the striking and rather easy-to-paint Argonauts CAG scheme. The black and orange certainly has put me in the Halloween spirit coming into October, and this kit seems to be the only way to get decals for this scheme in 1/72 at the moment (they are available in aftermarket in 1/48). It’s also nice to see Hasegawa starting to release the Block II Super Hornet with the prominent exhaust stacks represented. Finally, this build was greatly helped by Jake Melampy’s superb book, The Modern Super Hornet Guide, which I highly recommend to anyone building an F-18E/F or EA-18G.

My thanks to Hobbico for providing the kit, and IPMS/USA for the chance to review it!