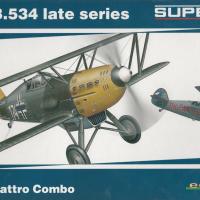 OK, this is not my first review of an Eduard 1/144 B.534. I reviewed the “early” version and now I get to review the “late” version. In the previous review I mentioned in the history that a B.534 flying with the Slovak uprising in October 1944 shot down a Hungarian Ju-52 transport. This was the last victory by a biplane ever. Well, this model is that airplane. The Avia B.534 began its career in 1934. At the time it was an advanced aircraft. By 1940 it was well into obsolescence. In August of 1943, Bulgarian B.534s were sent to intercept the B-24s on the Ploesti raid. They had neither the speed nor the altitude to reach the bombers. The decals for a Bulgarian B.534 are included in this kit.

This is a “quattro” kit. You get at least 4 of everything, except decals. There are enough decals provided to build 8 different planes. The sprues are different, depending on which version of the B.534 you want to build. If you look at the picture of the box back, there are two different types of canopies, with slight differences in the window behind the pilot. Each of these is provided in each of the clear sprues. There are also different gun arrangements, and these are provided multiple times too. It’s like having a spares box in the original kit box. There are also 2 sets of wheels on each sprue, with and without wheel “pants”.

You also get the marvelous Eduard canopy and wheel masks, enough to do 4 aircraft.

The first thing you need to do is determine which aircraft you’re going to build. You need the particular sprue for that aircraft. I decided to do the “Tri-Duby” 534 from the Slovak Uprising.

The interior is very nice, far better than we had 15 years ago in the last Century. There’s a floor, a seat, a panel with decal, and a stick. There’s a decal for the seat belts, but I used some Tamiya tape cut very thin for the belts. This version is the only one that really needs an interior, as it’s the only one with an open cockpit. The interior is easy to paint, spray sliver on everything, then paint the seat cushion, the panel, and the stick. The radiator assembly under the cockpit is also included in this assembly.

After the fuselage halves are joined, the top of the engine cowling is put on, depending on which version you are doing. For this kit, I used part B33. I took a photo of the fit for this part, as it’s the only place on the entire airplane where I had to use filler. I’m currently working on 1/144 F-100, F-101 and an F-102. If any of them had fit as good as this kit, I’d be truly grateful. As it is, I’ve used half a tube of Tamiya filler on these three jets.

The lower wings went on next, and at this time I painted just about everything.

The upper surfaces of the fuselage, horizontal stabilizers, and lower wing were painted dark greenish brown. I chose 30118 as closest to the Gunze “khaki green” on the color chart. The undersides were light gull grey. The upper wing is painted entirely khaki green, top and bottom. I then masked and painted the yellow stripe on the fuselage rear, the underside of the lower wing, and the yellow area on the nose. The wheels were painted khaki green, then masked and the tires painted flat black. I sprayed a coat of Future on the entire plane for decal application.

The canopy on this plane has the center section removed. This was done with a very fine PE saw blade mounted in a hobby knife handle. I painted the canopy parts and installed them after removing the masks.

The decals for this kit are marvelous. The decals came loose from the backing paper very quickly, and then they slid onto the area where they were supposed to go. One problem with 1/144 decals is that sometimes they float off the paper, and with surface tension it can be a real trick to get the tiny decal to behave. These decals didn’t do that. Another great thing about the decal sheet is that the decals for this aircraft were grouped in two spots on the sheet, so that when I finished there were two holes, but the other markings were still intact. I have had decal sheets which were reminiscent of Swiss cheese after cutting out the markings for one plane. Whoever did the design and layout for this decal sheet is VERY good.

I put the horizontal stabilizers on, with the struts. These assemblies go together so well, and fit so nicely. Next I put on the upper wing. I had some trouble with alignment at first, but I used an old trick. I put a small dab of tube glue on the ends of the struts. This gave me time to get things aligned before the glue set up, but the cement was thick enough to hold the parts in place. Someone suggested using an alignment jig to get the wings to hold still. Well, I have one. The arms are thicker than the distance between the wings on this kit. It’d work fine for large scale like 1/72.

The final step was the landing gear and the underwing bombs. The gear was almost as tricky as the wings, but the same method worked.

This is another of Eduard’s very good 1/144 scale kits. I recommend it both for the quality of the fit and the decals, but also for the historical significance of this aircraft. I LOVE the “historical” back story on an aircraft, and this one certainly fits the bill. Last year at the IPMS Nationals I asked one of the Eduard guys how they got such nice 1/144 scale kits. He answered that they took their fine 1/48 kits and downsized them. Makes sense to me.

Many thanks to Eduard for providing this great model, and to IPMS USA for the chance to build and review it.