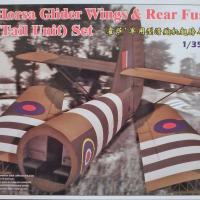 This kit contains the rear fuselage section and outer wing sections of a Horsa glider. It does NOT contain the entire aircraft. When I saw the size of the box, I imagined a complicated kit with a zillion parts. Nothing could be further from the truth. The kit contains 11 sprues, but fewer than 60 parts and assembly is completed in six steps. It includes a clear sprue for a window in the bottom of the fuselage, and a PE fret with two parts. The PE parts are optional and may be used to replace the plastic parts for brackets on the foremost bulkhead. All of the control surfaces including dive brakes are separate and moveable. There are some ejection pin marks on the inside of the flaps, so if you choose to display the kit with the flaps down, you’ll need to fill them. Otherwise, the kit has no issues.

This is a fairly simple build. The model is large, so a little extra care may be needed when assembling parts to ensure that all seams are aligned properly.

You begin by assembling the fuselage, which has what looks to be a complete interior. The instructions call for you to install the clear window (which may be in open or closed position) at this step, however I chose to install it after painting as this seemed easier than masking it. You next assemble the ailerons, tail with rudder &, elevators, and landing skid. Then, on to the wings. There are absolutely no surprises or obstacles in assembly. Not saying the kit would build itself, but you could build it in a weekend.

If there is anything challenging about this kit, it would be the painting, and this only because of the invasion stripes. I found measuring and masking these to be tedious, but this would be true of painting invasion stripes on any model. Still, I wouldn’t have complained if they would have included decals or painting masks for the stripes. I painted the entire kit with an airbrush using ModelMaster enamel paint.

The decals, although large, presented no problem.

The only issue with the decals is that there is a bit of confusing information about the placement of the tail insignia. On the box art, it is shown as having the read bar to the front and the blue bar to the rear. In the instructions it shows the opposite (see photo below). I did some research online, and went with the red bar in front.

I first gloss-coated the surfaces for the decals to adhere better and prevent silvering, set them with Solvaset where needed, and dullcoated everything as the final step after the paint and decals had set and cured.

This is a great kit. Not sure if you would want to display it as a stand-alone model, but It would make an excellent basis for a diorama. It would be an easy way to display a 1/35 scale D-Day armor or figure diorama with the parts of a landed and disassembled glider as part of the context. And you don’t have to build the entire aircraft, or build an addition on to your home to accommodate the extra area that entire glider would require.