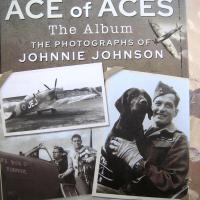 Air Vice-Marshal Johnnie Johnson, CB,CBE, DSO & Two Bars, DFC & Bar, DL, the highest scoring Royal Air Force pilot of World War II, had a diverse and very interesting background, as he was able to infiltrate the ranks of the RAF, which tended to favor the admission of the upper classes. Johnson was very middle class, and achieved his position through his quality as a man, not his position in British society. There have been a number of books written about Johnson’s life and career, but this book takes a different approach, consisting entirely of photos taken of him or of the people he associated with, and sometimes even of the airplanes he flew. These are captioned, giving explanations of what was going on, and who was involved. Johnson comes through as a very human character, someone you would like to associate with if you had the chance. Johnson not only associated with a lot of people during his career, but he always seems to have had a canine companion, although I doubt if he ever took one aloft in a single seat fighter. From personal experience, I can say that dogs and cats do take to the air easily, just about the same as riding in a car, but they do require space. If a man likes dogs and flying, what more can you ask for. He was a true war hero.

This book is a very different approach to a biography. It was compiled after he passed by a renowned aviation historian with whom he was very familiar, and the forward of the book, about the only pure text, was written by his granddaughter. It shows him and his associates in all kinds of situations, and also shows the aircraft he flew. Although it could not be considered a reference work for a modeler, it does provide some insights into Johnson’s career and what it must have been like to associate with him. It’s not the usual kind of a history book, but it is certainly worth having and reading.

Thoroughly recommended as a general history reference. Thanks, Pen and Sword, for taking a different approach to aviation history. Thanks to Pen & Sword Books, and Casemate Publishing Company for the review copy.