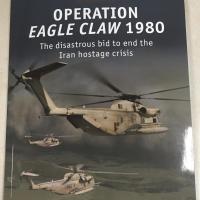 This book provides a bounty of historical documentation on the actual “EAGLE CLAW” operation, along with the pictures of actual events taken in the run up to and aftermath of the overall event. Some aspects of the mission are still classified; sourcing data is frequently difficult for anyone attempting to produce a commercial, open-source narrative on Government operations.

For those unfamiliar with this operation, it was (in the opinion of many) Noble but ultimately failed attempt to rescue U.S. Embassy personnel who were taken hostage by the (then) existent Religious-controlled Government of Iran due to sanctioned revolution and upheaval in the wake of the overthrow of the government of the Shah of Iran. The embassy of the United States of America, by all accounts and laws sovereign land was overrun by hostile elements supportive of the Ayatollah Khomeini, and rather than execute or expel the Ambassador and his entourage housed in the complex, a Hostage situation involving 66 members of the Embassy developed on 1 February 1979 after an Iranian mob overran the Embassy. This critical event ran through 444 days of captivity, during which several captives either escaped or were released on humanitarian ground. In an obviously politically-timed on 20 January 1981, the 52 remaining captives were released by the Iranian government, the exact day of the election of President Ronald Reagan into office.

This book goes into detail to a point where development of the situation where one final mistake led to disaster was evident from early on in the read. We have had four decades to evaluate the Entire plan and its contents, and even now much is not evident of lessons learned, as the author points out. The Fog of war, as it were, is very real, and at times overwhelming, in spite of command demands.

EAGLE CLAW is delivered as a totally timeline-driven narrative, the modelers focus is not prevalent but exists, with sufficient detail on many of the pictures of the aircraft being well reproduced in color and black/white, in focus. These images deliver enough data to identify what the aircraft were, and special markings used in particular by the Naval Aviation units used in this first major attempt of many “Joint” Operations. In this, the intrinsic value of the book is well- researched and coherently delivered. (Now I know what those strange black and yellow stripes were on other pictures I have seen)

Eagle Claw provided credence to the then-new Special Operations/Delta-Force plans existent at that time… Inter-service joint operations were more than feasible, but required mind-numbing coordination between all involved services and their individual methodology of operation. Even though, deemed at the time to be a total failure, the mission sufficiently demonstrated and revitalized funding and supporting irregular operations designed to address unplanned world events; the potential to successfully execute and complete a tasking of such magnitude was now reality. The fact many and various natural barrier to success impaired the units and actors who attempted to play the plan out ultimately leaves the myriad questions open as to “why” and “how”. This mission was not necessarily caused by ineptitude, but rather identified major flaws and symptoms of how plans can disintegrate in a rapid, bloody way, even when all facilities are brought to bear. It also ensured the idea of failure as a “teachable moment” where fault is not the goal but a part of the solution, to include determining risk levels and probabilities with consequences.

The military adage, “No plan survives the first contact with the enemy”, is therefore truth.

Hindsight being what it is, the book describes in detail events and consequences of decisions made on site. Just as individuals changing direction while driving a car due to indecision halfway through a turn can result in an accident, so too did the deaths of eight members of the USAF and Marine Corps at the desert refueling stop (“Desert One”) result from the inadvertent collision of one of the CH-53 Helicopters with its planned Refueling Aircraft (EC-130 62-18xx). Fatigue, stress, poor visibility and other operational considerations were all considered as causal, but had previously been marginalized. The ad hoc development of crew composition and choice of equipment all combined to add to the resulting incident. Experienced helicopter pilots understand the concept: hovering a helicopter is akin to standing on a board which has a large ball under it. Try it sometime…

A good example of such thinking is “an RD-53 is the same as an HH-53C”. While externally they are similar, naval operations at the time involved using their aircraft as Mine Sweepers. They did not practice rescue and recovery tactics at night and with night vision goggles as did the Air Force Rescue services; additionally, naval heavy-lift rotorcraft were not expected or equipped to fly extreme distances under blackout conditions. Their training did not address the intense, additional operations and personal training/experience required to successfully execute a long distance penetration mission with challenges and external inputs such as weather. This extremely impacts the ability of aircrews to do the job. Fatigue was the ultimate result due to stress of navigating and flying in blackout conditions. This and other factors such as equipment damage and failures ultimately became the fatal “last straws”, the largest of which led to the repositioning of one helicopter in low hover striking a static, large aircraft.

Jim Laurier’s cover painting is very well done and is a fine example of today’s digital artwork. The haboob dust storm in the background is keenly executed, drawing the observer into the hidden dangers of flying in the middle-Eastern regions where these hazards to navigation are particularly acute. It also provides more research data into the actual mission H-53 aircraft paint scheme, which was a light tan color with all markings and numeric/stencil data removed. The only problem I noted with the image being an close to perfect is all three helicopters have the EAPS (Engine Air Particle Separators) installed on the intakes of the engines, when in reality these were removed from the aircraft before the mission in an effort to increase engine performance while improving fuel burn. In reality, removing these filters was very contentious, as the EAPS had proven on many occasions to prevent Foreign Object Damage and subsequent engine failure (including Rocks and debris being blown up into the path of the engine during low hover as may have been experienced during the refueling stop at DESERT ONE), but someone high up in the command chain determined it was a worthy gamble to risk damage for range benefit. This became a moot point with loss of two aircraft and life, and eventual mission cancellation.

The book itself is organized logically, starting with origin of the mission requirement, strategy, planning, the raid, aftermath, and analysis. The plan was developed as the DELTA FORCE had not previously been operationally tested, and such operations were bound to have serious difficulty and internal friction within a system not designed to support new concepts.

Included in the book are diagrams and drawings of the position of the aircraft and helicopters at DESERT ONE, and a painting of the helicopter crashing on the C-130.

Notations on personnel armament and clothing/dress abound, and details frequently undiscussed about the mission are also included. The research on the book is appropriately detailed (and unclassified); the details I missed included the EC-130E’s from Keesler AFB. I had been assigned there in December 1981 as a new aircraft maintenance Officer, and remembered the three aircraft mentioned in this book (including the one involved in the ground incident) were from there. We had a metal plate in memorial on board one of the birds which the names of the crew and maintainers killed in the action was maintained. One of the aircraft, EC-130E 62-1825, maintained a write-up in the “K” (deferred maintenance file aircraft forms) as requiring 7 degrees of right rudder as standard for straight and level flight, as the airframe had been bent in hitting the ditch mentioned graphically as a problem during the takeoff. The EC-130’s were painted in the Southeast Asia Scheme with 36102 Green overpainting the underside light gray/white usually seen on most C-130’s of the day.

I had earlier mentioned the Naval attack and fighter component markings, and two pictures in particular caught my attention; one being the F-14A (#107 with the ace of spades fin marking) with the Red and black bands on the Starboard wing (top and bottom…), external tanks, along with the four AIM-7 Sparrow centerline load, and twin AIM-9L Sidewinder load on the shoulder mounts.

The remainder of the book is worth reading if no other reason than to learn about another piece of history. I found the details to be accurate from my limited personal knowledge, and give it high marks as a “go to” source for an infrequently discussed narrative. Well done, another winner!