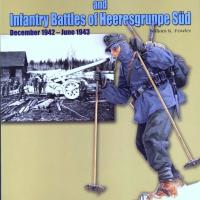 This book is Number 6530 in Concord’s Warrior Series. There are 3 pages of narrative on Operation Saturn and Heeresgruppe Sud (Army Group South), including the break down of which units were included. The rest of this volume is just filled with rare pictures of what the soldiers had to endure on the Russian Front, I was getting cold just looking at these pictures. The pictures are printed on glossy paper and are very clear so that you can make out everything in them. I especially liked how thorough the descriptions under each photo were. These pictures are just “diorama heaven” for the modeler showing everyday troop living and pointing out various uniforms and equipment.

Operation Saturn was a Red Army operation that led to battles in the northern Caucasus and Donets Basin regions of the Soviet Union (Dec 42-Feb 43). It was brought about by the success of Operation Uranus (Nov 42) which trapped 200,000 – 250,000 German troops of General Friedrich Paulus’s 6th Army and 4th Panzer Army in Stalingrad. Operation Saturn prevented Generalfeldmarschall Manstein’s Operation Winter Storm from breaking out the surrounded troops near Stalingrad.

There are 4 color plates that show the typical uniforms worn by Germany on the Eastern Front. These would be really valuable to figure or diorama modelers so they could get the colors right.

I highly recommend this book if you want a good reference on this particular part of WW2 history and I’m very happy to add it to my library of modelling and history materials. Thanks to IPMS and Dragon Models USA for this review copy.