The Liberation of the Philippines, Images of War 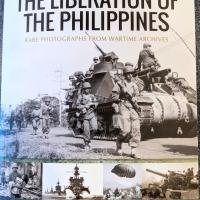 This book from the Images of War series, consists of 239 pages of mixed text, maps and black & white photos of the campaign to recapture the Philippines during WW II. There are seven chapters and an epilogue that cover the background to US involvement in the islands, the Japanese conquest of the islands, the terrain involved , the weapons used, brief bios of the principle commanders, the invasions of Leyte and Luzon and the recapture of Manila and the mopping up invasions in the remaining islands. While the historical text is relatively brief, it is only intended to provide context for the pictures. The photographic coverage of the campaign is extensive with over 250 photos of personnel, weapons and vehicles (which usually include a brief description), and pictures during and after the battle. The book is valuable in that many of the photos are rarely, if ever, seen and it covers a campaign that has a tendency to be either only briefly covered or overlooked entirely. The photos are all in black and white and are crisp and clear.

While it is not for those seeking detail photos of vehicles and weapons, overall it is a good basic reference on the campaign and a very good reference for modelers looking for ideas for dioramas.

I want to thank Casemate Publishers for providing the review copy and IPMS/USA for the opportunity to review this book.