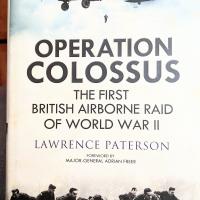 Operation Colossus was an airborne commando raid into Italy early in the war to interdict a particular aqueduct vital to the towns in the ‘heel’ of Italy. The operation is not very well known and this book is a welcome addition to anyone’s WWII library as it fills a void not covered in other publications. Author Lawrence Paterson spends a great deal of time at the beginning of the book relating the story of the creation and training of the UK’s airborne forces, going into some detail as to the people and personalities involved as well as the training and equipment used. If you have any interest in airborne forces, you will find this part very interesting and even if you don’t, it is written in a very readable manner, so it will hold your interest.

He then moves on to the actual mission itself, detailing how the target was selected and the planning and forces that were involved. His recounting of the actual mission is complete, very detailed, and easy to follow. What is almost more interesting, however, is the chapter on the manhunt for the British paratroopers after the ‘deed was done’. It would make a good story for an action/adventure movie. The final chapters concern themselves with the short and long term effects of the raid as well as the post-mission stories of those involved, including the time spent in Italian and German POW camps and the numerous escape attempts, successful and not.

Short and sweet, if you have any interest in WWII, airborne troops, or Britain’s war effort, this is a good book for you. As I already said, the style is very readable, even though the author goes into some pretty picky detailed information. His coverage of the formation of the first airborne units in England is worth the read by itself.

Thanks to Casemate Publishers for providing the review sample.