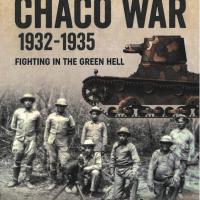 From the perspective of the United States, the interwar period, the interval between the First and Second World Wars, our story was insular – the hedonism of the 1920s, the Great Depression, and the road to war. From the US perspective, it was a time of peace. Far to the south of us, there was a bloody struggle between Bolivia and Paraguay over a region known as Chaco. In the newest edition of Helion & Company’s ongoing series on warfare in Latin America (number 20 in their series) it tackles the Chaco War. Like many publishing companies, Helion uses a formula of a concise narrative, photographs contemporary to the time period, color profiles of vehicles, planes and ships, and a small selection of uniforms. I believe that there is a separate volume in this same series that covers the air war. The Chaco War was the first aerial war over South America, so it is really not covered in this volume.

As with many conflicts, this started over a dispute regarding territory that both Paraguay and Bolivia claimed. The disputed territory known as Chaco, was a point of contention from the late nineteenth century until the time that war broke out. There were various attempts at a diplomatic settlement, but Bolivia aggressively occupied the disputed territory, which triggered Paraguayan war preparations. Compared to the titanic struggle that occurred a decade earlier in Western Europe, both sides mobilized a modest number of men with a very modest collection of artillery and, for Bolivia, tanks.

The authors lay out what amounts to a summary of the campaign from 1932-35. Even though Paraguay was largely unprepared, they made the first move in the fall of 1932 and went on the offensive, since they saw themselves as the aggrieved party. The Paraguayans pushed hard against several of the Bolivian fortified camps in the Chaco. Despite making good progress, by the end of 1932, the offensive had petered out. In the meantime, Bolivia had mobilized its armies and equipped them with modern weapons and unleashed a counter offensive in 1933. The initiative passed to the Bolivians. They made progress, but the high casualties led to intense criticism of the high command. The offensive came to an end, again, with some progress but not enough to end the war in their favor.

The remainder of the war, until 1934, could best be described as a see-saw with both sides conducting offensives and counter offensives. Eventually, the Paraguayans were able to gain the upper hand, but it came at a huge price. While precise numbers seem hard to come by, there were over 100,000 casualties, not to mention up to 70,000 civilians. Nevertheless, even though Bolivia had more resources to draw upon, Paraguay not only put up a fight, but made gains against an arrogant enemy. In the end, Paraguay was able to keep the land in Chaco that they had occupied prior to the war and Bolivia kept the rest. Perhaps a diplomatic solution would have made a difference…..

I am grateful to see that a publishing house has found a successful formula that sheds some light on a critical conflict. The format Helion has chosen suits these regional conflicts. The contemporary illustrations are evocative and well chosen. For modelers, there are some great diorama ideas here. Take a look! My thanks to IPMS and Osprey Publications for giving me the opportunity to review this book.