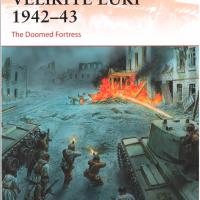 When the Nazi invasion of the Soviet Union, known as Operation Barbarossa, began on 22 June 1941, it would quickly become the campaign that would destroy the Nazi Empire. Long before the battle of Berlin began in 1945, there were a thousand moments of violence and drama that would define this struggle. While many know the broad strokes of the eastern front, these individual battles within larger campaigns remain in the shadows. This book focuses on one of those struggles.

Velikiye Luki is the 351st offering in Osprey’s long running campaign series. They follow a tried and true formula. It begins with a brief introduction that speaks to the origins of the campaign, a brief chronology, the commanders of both sides, the forces at their disposal, the plans of both sides, and then a narrative focused on the campaign and its aftermath. Like many of these works, the book is richly illustrated with contemporary photographs from both sides of the front line, colorful and detailed maps of each step of the campaign, and several full color illustrations that depict key moments in the campaign.

The story focuses on a series of events that took place in the winter of 1942-43. Velikiye Luki is an old Russian Fortress town south of Leningrad and Novgorod. It was on the border line between Army Group North and Center, which was to cause problems as the commanders of both Army Groups were uncertain who was responsible for the defense of the fortress. Moreover, the Soviets took advantage of this weakness. To put this event in context, far to the south, the siege of Stalingrad had been going on since the summer, so much of the strength of the Wehrmacht had pivoted south. Velikiye Luki had been captured and lost in 1941 and recaptured again and had been held by the Germans since the late summer. This story focuses on the Soviet winter counter-offensive that took advantage of the weaknesses in the German line. The plan was to surround and cut off the German garrison.

The Soviet offensive was successful in surrounding the Germans, initiating a siege that would last into January, 1943. The German garrison was a hodgepodge of forces that entrenched in the old fortress. While they put up a determined fight, the Soviets squeezed the German perimeter. As at happened in Stalingrad, the Luftwaffe attempted to supply the garrison by air (mostly by glider). There was an attempt by the Germans to relieve the garrison in December. They met a great deal of success, but could not break the siege. As the perimeter contracted into itself, they did not fight to the last man, but surrendered to the Soviets in January. Unfortunately, the rigors of captivity took a toll on the survivors. Most perished. For the Soviet’s, even though the garrison was eliminated, they did not make the large gains that they had hoped. For the Germans, while Stalingrad overshadowing everything, it was a loss they could ill afford.

The Second World War was won on the backs of the millions of Soviet soldiers and citizens, not only murdered and killed by the Nazis, but by the Stalin regime as well. This book is a tiny vignette of a long and bloody struggle. It is a welcome addition to the Osprey campaign series. My thanks to IPMS and Osprey Publications for giving me the opportunity to review this book.