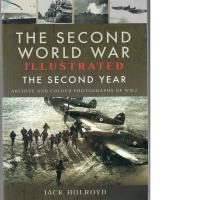 The second year of World War II was one of almost unrelieved disaster on the Allied side. The German side was doing very well, except their Italian partners. This 280-page illustrated book tells the story of the war from September 1940 to September 1941. This is the second volume in what I assume with be six book series. Here is the table of contents:

Each chapter is between 30 and 50 pages and has a short introduction followed by a lot of photos. The captions for the photos are very detailed and helps tell the story of what is happening in the chapter. All the photos in these chapters are in black and white, but there is a 32-page color section in the middle of the book. These photos cover the whole second year. I did notice that many photos seem to be computer enhanced. Faces are more visible, and some darker areas seem to be lightened up. There are maps included to help illustrate what is happening in each of these theaters of operations. There are many photos of the commanders with a brief bio on them. Modelers will find many photos that would make good dioramas. The color section has nice photos of German aircraft in North Africa. I have been reading World War II history since the 1970s and many of these photos I have never seen before.

I would like to thank Casemate Publishers and IPMS for this book to review.

WWII tank and plane in color

WWII the coverpage for the color photo section