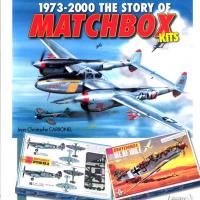 This book is the English translation from the French by Jennifer Meyniel and the author. I have to say that it is a very good translation, as the text is very readable. I finished this book in one evening, during the commercial breaks in a couple of favorite Tuesday evening TV shows.

Mr. Carbonel has taken the time and trouble to track down many of the players in the Matchbox plastic model division, done interviews and has done pretty extensive research on this subject. I had never heard of him, but apparently he is a respected author and aviation authority in France.

There are four sections:

Each section is divided into chapters covering one year, although some years are skipped late in the book, as not much happened after 1997.

Much of the text is taken from the sometimes scathing reviews by Airfix Magazine, Maquettes Plastiques Magazine, and Scale Models, although when Matchbox got it right, they did jump right in and say so. Another interesting source for reviews is IPMS Brooklyn.

There is also a short discussion on why kit manufacturers get things wrong. Matchbox got the wrong dimensions on the tail planes of their Canberra. The reason for this was that the Canberra Technical Manual had the dimensions wrong, and the design department didn’t doubt them.

Matchbox didn’t just do aircraft, they did ships (I have one), armored vehicles, (I have eight) civilian vehicles, and figure sets. These are pretty well covered, along with the diorama/display bases which came with the AFVs.

Matchbox started out in 1973 as part of Lesney, using the name of the miniature car line. In 1978 Matchbox bought the US Company AMT. The logo on the kits just added Matchbox to the AMT kits, and AMT to the Matchboxes.

In 1982, Lesney declared bankruptcy, and the model company was sold to a Hong Kong investor. AMT was sold to Ertl, so the boxes once again said only “Matchbox”. The new box also now had the black stripe with the red, orange and yellow “swoosh” below the picture of the model.

The new buyers had bought Matchbox for the die-cast cars, and were less interested in the plastic models. Fewer and fewer new kits were produced, and the prices were being driven up by inflation and the costs of materials.

In 1991 Tyco bought Matchbox. Since they were not interested in the plastic model end, Revell Germany bought the rights to the Matchbox molds. The boxes changed again, now with black on 3 sides of the picture, with red/orange/yellow bands below and behind the picture.

With the 1998 catalog, Revell’s license to use the Matchbox name expired. Revell kept the molds and allowed the Matchbox name to disappear from the plastic model world, marketing former Matchbox kits under the Revell name.

Highly recommended, especially if you’re interested in the history. Or if you want to know who boxed what kit that wasn’t their original mold. The kit list on pages 80 and 81gives the PK number for every Matchbox kit, plus the 400 series for Revell/Matchbox kits. Also included is the origin of some of the non-Matchbox molds which were boxed and sold under the Matchbox name.

Thanks to Casemate Publishing for this interesting book and to IPMS/USA for the chance to review it.