US Soldier versus German Soldier, Salerno, Anzio, and Omaha Beach, 1943-44 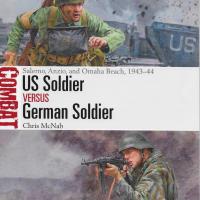 “US Soldier versus German Soldier, Salerno, Anzio, and Omaha Beach, 1943-44”, published May 2020, became number 48 in Osprey’s Combat Series. Osprey’s Combat Series, first published in 2013, describe in detail history’s adversaries pitted against each other using analysis, photographs, maps, and commissioned color plates. Chris McNab, author, and editor has written numerous books for Osprey and more than a hundred books, magazines and newspapers on military history and military technology. Steve Noon has illustrated over 50 books for Osprey.

The author’s goal as he described was to detail and analyze the Allied amphibious landings at the three beaches and their counterparts. He examined in immense detail the German defenses, US troops assault tactics during and after the initial landings. In the introduction the author includes a one-page color illustrated map showing the locations of the assaults. I found this to be helpful to follow along during the read.

The next 21 pages is broken down into four sections

In the first section the author along with the illustrator include a two-page color spread depicting a US Combat Engineer and a German Infantryman. A nice addition for the figure painter to use as a reference. The author superbly describes both sides in a straightaway fashion this reader found informative.

Salerno: After the fall of Sicily and Mussolini’s ousting, the invasion at Salerno, code name Operation Avalanche, began with the British Eighth Army commanded by Montgomery and the US Fifth Army led by Gen. Mark Clark. The author describes the background to the invasion and a detailed description of the US Combat Engineers role. An excellent b/w image of a German 8.8cm Flak gun overlooking the Salerno landings appears in the introduction on page 19. A colorful image on a 2-page spread is included on pages 38-39 by Steve Noon depicting the advance on the beach by US forces.

Anzio: Another Italian beachhead landing, code name “Operation Shingle” took place on January 1944 with the goal to capture Rome. The armies involved consisted of the Allied forces, commanded by John Lucas versus German defensive soldiers, commanded by Kesselring and Mackensen and Italian forces. As with the previous section on Salerno, the author includes a background to the battle. Although, as the author explains, the initial amphibious landing was a surprise and was uncontested, what followed was a lack of inland advance by the Allied forces. The landing was to last over several days, rather because of the non-commitment to advance, the battle at Anzio lasted several weeks. The author includes in this section a colorful one-page map depicting force movements and a date map key. These are helpful to refer while reading. Several black and white images are included as well as an image of a 28.3cm Krupp K5 railway gun shelling the Anzio beachhead on page 53. Then on page 55 the author includes a view of a US Army mine-clearance team. An interesting read follows with the author’s inclusion of a journal report written by Major Monnier of the 540th ECR and the battle description from Major General Kesselring’s perspective.

Omaha Beach: I can only guess why the author chose Omaha Beach to include in his narrative rather than the other beach landings in Operation Neptune. Presumably because it was the most heavily defended added to his decision. On 6 June 1944, the amphibious landing began as part of the Normandy invasion making this a second front in the war. The combatants included forces from the US, Free France, United Kingdom and Canada primarily commanded by Omar Bradley. The German opposing forces commanded by Dietrich Krail and Ernst Goth. As with earlier comparisons, this section starts with a background to the battle. He includes a map key and a one-page colorful illustrated map showing beach access routes and the German resistance positions. Several images this reviewer has seen before are included depicting the beach landing with 2 color images of LSTs, several black and white photographs with a couple of photographs of German defensive weapons.

Analysis and Aftermath: The author describes on the next 6 pages his analysis of what the military learned from the Salerno, Anzio, and Omaha Beach amphibious landings and the importance of the combat engineer’s role and their experience. He summarizes details such as proper training needed to be initiated, equipment overloading bogged down the combat engineers, and at what point in the landing would the combat engineers be deployed among other factors. He briefly discusses the improvements to the defensive positions the Germans could have made which ultimately would have changed the outcome.

If the author’s goal in writing this book was to detail by comparing the US Combat Engineer’s role versus the German Defensive Soldier during and after the amphibious landings at Salerno, Anzio, and Omaha Beach, then his goals were met.

The images are clear, with a few a little grainy given the age. The author includes captions with each image giving the reader a detailed and, in some cases, rather lengthy description of what they are viewing.

This undoubtedly is a great resource for the historical buff as well as an excellent reference for the modeler, beginner or skilled. For these reasons, this book will make an excellent addition to any modeler or military historian’s library. I highly recommend it.

Thanks goes out to Osprey Publishing and IPMS/USA for the review sample.