Normandy: A Graphic History of D-Day 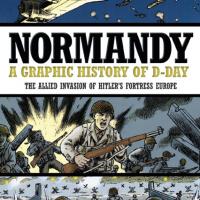 More often than not, books reviewed by the IPMS Reviewer Corps are targeted for the scale modeling enthusiast, history buffs, or a combination of the two. Wayne Vansant’s Normandy: A Graphic History of D-Day is a little different. Unlike more traditional narratives or photo references, it brings the events of the Allied invasion of "Fortress Europe" to life in vivid color in a comic book format – a 104-page comic book, to be exact. It seems well-suited for younger readers and comic enthusiasts.

The author chronicles the prelude events leading up to Overlord all the way through the liberation of Paris in the summer of 1944. Each of the 5 beach invasions is documented, as well as several key engagements leading up to the 2nd Free French Armored Division’s triumphant entry into Paris. The illustrations and the accounts of the battles and some key characters, although brief, are absolutely riveting for young and middle-aged readers alike.

The sample copy ended up in my mailbox because the Reviewer Corps’ “Head Distribution Elf” thought the volume would be of interest to my youngest, Camden, a 7-year old scale modeling machine. Wow...did it ever capture Camden's imagination! Although there's a bit of blood and guts (literally speaking), as well as General Patton, we steered clear of the more graphic stuff and knocked out about a chapter each night over the course of a couple of weeks.

This book is a "must have" for modelers or history buffs wanting to convey the significance of the D-Day invasion to a younger generation – most suitably 13 and over, although some younger ones could handle it with parental filtering.

Thanks to Zenith Press for the review copy and to IPMS/USA for the privilege of reviewing it.