Kharkov 1942: The Wehrmacht Strikes Back 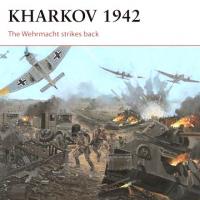 Through their intelligence gathering operations in the Spring of 1942, the Soviet Military Command became aware that Hitler and the Wehrmacht were planning a forthcoming summer offensive. In order to disrupt the Germans, Stalin ordered Soviet forces, under the command of Marshal Timoshenko, to prepare and launch a campaign to disrupt German plans. The area chosen was the Kharkov sector, the intent being to encircle and destroy the German Sixth Army. However, unbeknownst to the Soviets, the Germans were planning their own offensive in the Kharkov area, code named Operation Fridericus. What started as a promising Soviet push ended up with a German rout of Soviet forces, and one of the Red Army’s biggest defeats of the Second World War.

This book provides the reader with detailed coverage of the opposing commanders and their forces, together with a description of each side’s battle plans. We are then treated to a detailed description of the initial Soviet offensive (which ran from 12-20 May 1942) and German countermeasures before being shown the major German counteroffensive (17-23 May) and German rout (24 – 29 May).

The text is liberally sprinkled with well-captioned black and white period photos, together with color topographical maps laying out the position of Soviet and German forces at various periods of the fighting. Most of the latter are very useful, although the one between pages 64 and 65 is ruined by crossing the spine of the book, with much detail lost. Two further annoyances are the artwork which takes up fully 9 of the book’s 96 pages. In my opinion, the artwork, in the form of three double page sketches plus full page descriptions, isn’t particularly inspiring or particularly useful as a descriptive tool. A second annoyance is the author’s changing from one form of description of a German unit to another; one minute, the Germans are organized into “Divisions”, the next “Divisionen”. While Germany’s ally Hungary has a “Light Infantry Division”, the Germans have a “leichte Infanterie-Division”, and the next minute a “leichte Infanterie-Divisionen”. Consistency suffers.

Other than these two issues, I found the book to provide a very good primer to anyone interested in this important Eastern Front campaign.

My sincere thanks to Osprey Publishing for providing this book to IPMS USA to review, and IPMS for allowing me to review it.