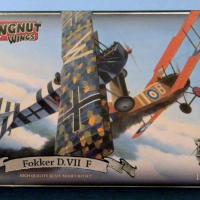 The assembled engine dropped in place with little drama…but, because of the rather complex way the engine, engine bay framing and multi-part cowling align with the fuselage, I first carefully dry-fitted everything (and temporarily taped parts in place) to make sure there were no gaps between panel lines. Doing this also ensured that the front of the engine was centered in the opening in the cowl front. I cemented the engine in place and removed the engine panels to make the necessary adjustments as called out in the instructions.

I had decided to finish the model in the markings of Ernst Udet (one of the schemes provided in the kit). Since Udet’s aircraft was one of the earlier versions of the D.VII F with the extra lower front cowling vent holes and the extended fabric panels ahead of the firewall, some modifications were required. All of this was described at certain points in the instructions, so it was important to read and understand what modification steps were required (as various parts are provided to build different versions of the aircraft…and, some of them require modification). I opened the holes in the front of the cowling, removed the late version louvers from the side cowlings and filled the seams between the forward fabric panels and the fuselage sides where they meet. Then, before going further, I painted everything to match the pre-painted fuselage and touchup up anything that would be difficult to reach after everything was assembled.

The twin Spandau Machine Guns came next in the build sequence. The kit includes parts to build the guns two ways…with and without photo-etched jackets. I chose to build mine with the photo-etched jackets so the guns would exhibit maximum detail. After rolling the jackets around the convenient cylinder provided in the kit (part D6), I found it difficult to place the jacket on the gun, position the faceplate over the protruding gun barrel and attach everything as illustrated in the instructions. I just didn’t have enough hands to hold everything in place and reach for the super glue. So, after a couple of aborted efforts and some head scratching, I decided to alter the assembly sequence. I first cut off the front of the gun barrels at the groove behind the muzzle ring. Then I positioned the faceplate on the rolled jacket, attached it with super glue and placed the entire photo-etched unit onto the gun body…making sure the front of the barrel protruded slightly through the slot at the bottom of the faceplate. I then reattached the muzzle to the front of the barrel and painted everything gunmetal. It seemed to be a much easier way to get everything lined up and assembled.

After the guns were placed on their mounts, I added the empty belt chutes and padding and checked the alignment of the flash guards over the engine (something that is described 6 pages later in the instructions) and spent a little time adjusting the alignment then so they fell in place under the muzzles and fit the bolts on the valve rocker heads (see the photo below). There is no doubt that Wingnut Wings provides everything to build a highly detailed model…they just challenge the model builder to do some real model building here and there...and maybe read and understand all of the instructions before assembling anything.

Assembling the landing gear was made easy by the kit’s slot and tab construction (if those points are cleared of any paint film). After cementing the struts to the sub wing, I placed them in their respective slots along the bottom of the fuselage and suspended the airframe so gravity kept everything in line as the glue dried. When that was dry, I cemented the landing gear to the fuselage. Because of the true to scale thickness of the struts, the landing gear seemed to quiver a bit until I attached the cross rigging and tightened it up. After that, the landing gear was sturdy enough to support the completed model. Again, I decided to vary the assembly by leaving the wheels off until one of the last steps in the assembly.

The tail unit came next and I chose to drill and pin the elevator part to the stabilizer for added strength and so I could position them in a slightly deflected angle (read drooped). After placing everything, I added the appropriate control cables using .002 mm sterling silver wire I cut to fit and pre-blackened with some of the Blacken-it liquid that is marketed for model railroaders. I added the stabilizer braces and attached the fin and rudder (again, slightly deflected) and used monofilament for the rigging.

Placing the top wing and adding the aileron control cables followed. Again, Wingnut Wings’ precise tab and slot construction made alignment a fairly painless experience (if every trace of paint is removed from the pins and the slots). The need to place only aileron cables instead of typical biplane rigging made the almost final assembly steps go quickly. I say almost last assembly steps because the last steps were attaching the fuselage step and lifting handles, placing the wheels and adding the pre-painted propeller.

The assembly took a little longer than I had planned, but the time required to study and digest the assembly instruction, pre-paint (and decal) most parts, clear attachment points of any paint film, dry fit and carefully align everything paid off. I enjoyed the build and the completed model is a striking replica of the actual aircraft.

My kudos to Wingnut Wings for offering a kit that delivers both a great looking finished product and a great model building experience. This kit is highly recommended to modelers with a few kits under their belt. My thanks to Wingnut Wings for providing the review kit and IPMS/USA for permitting me to build and review it.