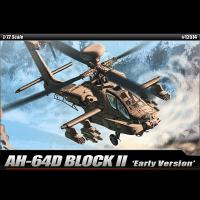 The AH-64 was developed for the Advanced Attack Helicopter back in the mid 1970’s and was to replace the AH-1 Cobra. First flown in 1975 and introduced into the US Army in 1986, the aircraft had many upgrades since then it’s introduction. The “D” version or “Longbow” increased the helicopters lethality and situational awareness. The most noticeable addition to the Delta model is a mast mounted radar located above the main rotor. With the radar above the rotor, it allows the Apache to detect targets while remaining behind cover. The main rotor shaft is hollow which allows a fixed shaft to extend through the hollow rotor which allows the attachment of the radar. Other enhancements include a “glass” cockpit, advanced sensors and upgraded engines. Most if not all of the “A” model Apaches have been converted to “D” model standards.

Inside the box are four sprues of nicely detailed parts molded in light gray with minimal flash. One thing that really jumps out is the rotor blades and hub which is molded as a single piece. The detail is unbelievable in 1/72 or any other scale for that. There are two instruction sheets which one shows the build and the other shows painting and decals. Note that you can build one of six versions and the instructions indicate which parts are for each version. It is more than just decals that make the different variants.

Starting off with the cockpit, detail is very nice and crisp details. The front (gunner) and back (pilot) instrument panels are very detailed down to the buttons on the flight displays. The Canopy is a single piece with no option to pose the canopy access open. Before you seal the fuselage halves, there are different holes that need to be drilled for each version, double check you have the holes drilled. There are a lot of little pieces that need to be added from steps, antennas, access doors (version dependent).

One thing I wanted to do is make the mast mounted radar did not rotate with the rotor blade as the kit would have it do. To fix this, some precision drilling was required and the use of a small drill press really helped but can be done by hand is real steady hands are used. What is needed is to remove the rotor shaft from part #B36 then drill a hole in that same part that is the same diameter as the shaft that was removed. Next is to drill all the other components that attach, main rotor hub (B28) and Mast mounted radar parts (B41, B57 and B74). Prepare the transmission to accept a new rotor shaft and once the model is ready to install the rotor and radar, install a new rotor shaft into the transmission. If done correctly, the rotor will revolve freely around the new “fixed” shaft and the mast mounted radar will attach to the new shaft. The tail rotor is a little easier, just make a small collar that captures B43 into B22. The rest of the build is fairly straight forward.

Basically there is one color finish which is federal standard 34031 “Helo drab” although the instructions call out a mixture of olive drab and black. Since there are quite a bit of small decals, I decided to use Xtracolor paint which have military colors that are normally flat, produced in gloss but it take a few days to fully dry. There is also an acrylic version called Xtracrylix which dry a lot faster. A combination of other brand paints of the same paint spec as well as lightened shades of helo drab were used for color variations. Decals are printed by Cartograf and they went on without any issues. There are some decals that go on the canopy side windows that represent detonation cord which appear too bright unless you are modeling a brand new aircraft. After those decals were applied, I softened the color by painting a light coat of Tamiya “smoke). See photo of before and after effect.

For a 1/72 scale helicopter, this little kit is packed with detail and precision parts for a simple assembly. I highly recommend this kit for anyone wanting an accurate AH-64D Apache.

Many thanks to MRC/Academy for providing this kit to IPMS for review.