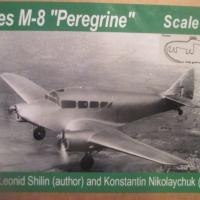 The Miles M.8 “Peregrine” was the first twin engine to be developed by Miles Aircraft Company, and was built at their Woodley Plant in the UK, first flying in Sept. 1936. It was a low wing, twin engine monoplane powered by 205 hp. Gypsy Six air cooled engines. It had a retractable landing gear, and could probably be considered to be one of the world’s first small “executive” transport types. Besides a pilot and co-pilot, it had seats for six passengers. Since Miles had already put the “Magister” trainer into production for the RAF at their Woodley Plant, the plane was never developed, although later, one further prototype was constructed for the Royal Aircraft Establishment, using American Menasco engines. This aircraft was used by the RAE as a test bed. With the beginning of World War II, the type faded into oblivion,

The aircraft is covered in several books, including Amos, Brown, and Lambert’s Miles Aircraft Since 1925, Vol. 1, The illustrated Encyclopedia of aircraft, and Jackson’s British Civil Aircraft since 1919. Looking up the aircraft on Google will also bring up a lot of information on the aircraft.

The kit includes one half-size sheet with seven exploded assembly drawings. There is no text, color guide, sprue diagram, or any reference on interior or exterior colors. The photo on the boxtop is also a very useful reference,

The kit is cast in resin, with approximately 25 major parts, and numerous small detail parts, including the props, landing gear, wheels, and interior details. The major parts, wings, fuselage, engines, center section, etc., were rigidly mounted on resin bases, and were in excellent condition. The smaller detail parts, including the props, landing gear struts, etc., were a shambles in their small plastic bags, and required considerable gluing and reassembly to be useable. Some were beyond hope or repair.

The major parts went together in the usual fashion, although the cockpit floor was slightly too wide, are required some trimming before the fuselage halves would line up properly. The seats and cockpit interior had to be installed on the cockpit floor before the whole unit could be set in place so that the fuselage halves could be joined. Incidentally, some of the seats had one of the armrests missing, so I was careful to position them so that the armrests were against the outside. I didn’t know how visible they would be through the plastic canopy anyway, so this may not be an issue. The vertical stabilizer needed some added surface, as it should be pointed on top. I had to add a small piece of plastic and sand it to shape.

I used super glue for all of the attachments, and it seemed to work OK, although I’d feel better with some kind of rod strengthening the wing assemblies. Butt fitting them doesn’t seem too secure, but I guess they will hold if I don’t handle the model once it is finished.

After attaching the clear plastic canopy, I spent several hours adding filler and sanding to get as smooth a finish as I could on the fuselage top. I almost, but not quite, succeeded. Once I had filled in some seams on the joints, I attached the wings and tail surfaces. The wings fit pretty well, and lined up with what appears to be the proper amount of dihedral, although, without a good three view, this is really conjecture.

The real problems were the propellers and the landing gear assemblies. The two props had only one blade attached on one of them, with the others being in the debris provided as the detail parts. The long rear portions of the landing gear assemblies, which require two complete units for each side of the engine nacelle, were incomplete, with only two, instead of four, units provided. These were complete, but there weren’t enough parts in the envelope to make a second unit for each side. The landing gear struts were provided in one piece, and only one of them was intact, while the lower portions were in the debris section. I glued those together, and they worked perfectly, providing enough “play” to allow the wheels to snap into place, even on the glued portions. The tailwheel unit was somehow intact, and this just was glued on as per instructions.

I fought with the props for about half an hour, but they were too delicate and tiny that I was never able to get them reassembled from the parts I had. I decided to just install plastic rods as crankshafts, as the plane probably had to have the props removed from time to time for maintenance anyway. I didn’t have anything close to them in my spares box, and the wrong props would have looked terrible. I even contemplated contacting the kit producers for another set of detail parts, but figured it would take too long to get them. Maybe next time. Later, I tried again on the props, and got them together, but I’m not really satisfied with the results. I would have used props from an Airfix DeHavilland Tiger Moth, but I only had one, so that didn’t work either. So the originals are on the airplane, but it sure wouldn’t pass my preflight inspection.

The airplane was apparently silver overall. The photo on the box shows this, and the photos that are available on line show only a small letter-number combination, “U-9”, on the rear fuselage side. This is apparently some kind of civil experimental registration, but the decal is provided. It could be easily made up on the computer, so this is not a problem. The decals were of excellent quality, and slid on without any trimming. Anyway, the whole airplane can be assembled, even the landing gear, before airbrushing the model silver, as long as you mask off the cabin and cockpit windows first. This makes things easier, especially since the parts have to be superglued on.

The landing gear was a bit shaky going on, but after the main gear struts were installed (one had to be glued together), the wheels were slid into place, and I was surprised that they both went on just as they were supposed to. I then attached the intact gear strut mechanisms on the outsides, using thin rod for the interior units. You can’t see them unless you look for them.

After unmasking the windows, I found that there wasn’t much visible on the inside. You can see some of the seats, but not much of the cockpit. Maybe that’s just as well.

This is a kit of a one-of-a-kind airplane, so you’d probably never build more than one. I must say that when completed, it does look like the airplane on the box art. I don’t know whether the airplane ever received a regular “G” registration, but that would improve the looks somewhat. As it is, even experienced modelers and historians will probably ask you what it is. For the price, you’d probably have to really want to buy one, but it is a challenge, and it would be a lot more work to try and scratch build one. So if you want one, I’d recommend getting one while they are available. Just remember, though, that it will be challenging.

Thanks to Croco Models and John Noack for the review sample.